“Unbroken” Has Roots in Winona Lake

Today’s Warsaw, Ind., Times-Union shares some of the back story of the movie, Unbroken, which was released Christmas Day. The movie tells the story of Louis Zamperini, a U.S. Olympian, who was held as a prisoner during World War II. Zamperini was invited by Dr. Ronald Manahan, former Grace College president, to speak at the college in 2011 when students were reading the book based on his life. He also stayed at Westminster Hotel in 1952 in Winona Lake for a convention. A portion of the story appears below. Click here to read the complete story (subscription required). 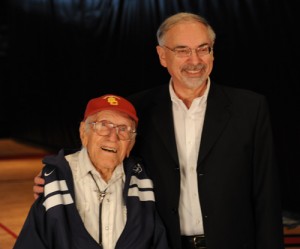 WINONA LAKE – For the subject of the Angelina Jolie-directed movie “Unbroken,” Louis Zamperini, the difficult decision to return to Japan has roots in Winona Lake.

Zamperini, a U.S. Olympian and athlete, was invited by Dr. Ronald Manahan, former Grace College president, to speak at the college in 2011 when students were reading the book based on his life. He also stayed at Westminster Hotel in 1952 in Winona Lake for an evangelical convention.

Zamperini died July 2 at the age of 97. According to an oral interview conducted by George A. Hodak in June 1988 for the Amateur Athletic Foundation of Los Angeles, Zamperini said of the decision to return to Japan that started 1952, “I never thought this would happen, because I had once made the statement that I’d rather be dead than to ever return to Japan, a country of such unpleasant memories.”

He had survived in a raft for 47 days after his bomber was downed in World War II, then was captured by the Japanese. He was tortured in a series of prisoner of war camps.

His story is told in “Unbroken,” a 2014 American war drama produced and directed by Angelina Jolie, based on the 2010 non-fiction book by Laura Hillenbrand, “Unbroken: A World War II Story of Survival, Resilience, and Redemption.” Jack O’Connell plays Zamperini.

In the interview he said, “Anyway, there was a big convention in Winona Lake, Indiana. Billy Graham was there along with missionaries and evangelists from all over the world. Then I heard a fellow from World Vision speaking on the Orient, he had just gotten back from Japan.” They were forming 100 teams at Winona Lake to go back to Europe but none to Japan.