A few months ago we posted the picture above on the Grace College Facebook page for our History of Grace Week on social media. When Dan White commented on the photo — “In the first picture (with the students exiting the building) one of the most momentous events of my life took place in 1968.” — we knew there was a good story just waiting to be told.

The conversation with Dan continued over personal messaging:

That picture of the doors at McClain Hall leading out to the walk down to the library that I commented on the other day, was where Rev H Leslie Moore met me en route to the first class of my college career on Sept 5, 1968.

He had been my pastor from 1957-1965 when he and his wife moved to Winona Lake to be the house parents for the school. So I knew him; and thought nothing about it when I got to the entryway to McClain.

The truth is, he was waiting for me. He had a message for me: “Your dad wants you to call him.”

We got to his apartment (the room off to the left in the main entryway to Alpha Hall). I called my father, only to hear those dreaded words: “Dan, your mother passed away this morning.” She was a month past the age of 45. She died of pancreatic cancer. Such events tend to impact your life.

The fact that in the sovereign plan of God my favorite pastor and pastor’s wife were there when I needed them most was of great encouragement and comfort.

This experience has made me a better encourager and comforter than I ever would have been otherwise.

It has made me more sensitive to young ones who have lost such a significant person in their lives.

What I went through has also helped me in a college setting today—over 50 years later—as I seek to minister to that age group when I was forced to grow up overnight.

To say that these messages left us flabbergasted is an understatement. But it still left us curious to fill in the blanks. What was the prognosis leading up to his mom’s death? Did he return to Grace in Indiana while his family was in Washington? How and where is Dan ministering today?

We gave Dan a call to find out.

Dan White was born in Illinois, but most of his childhood was spent in Sunnyside, Washington. His mother grew up in a Grace Brethren (now Charis Fellowship) church — the same one that Grace College founder Alva J. McClain attended. His uncle was a Grace Brethren pastor, and his pastor, Leslie Moore moved to Grace to be the dorm parent with his wife Dan’s freshman year of high school. So Dan was well acquainted with Grace, to say the least.

He enrolled in the incoming class of 1968 at Grace (before they had Facebook groups for that) as a history major, Greek minor, and planned to go on to seminary. But before he left for his freshman year, his mom got sick.

Dan remembers seeing her the night before her biopsy on the first of August. Little did he know, that would be the last time he saw her. The next day, Dan and his younger brother boarded a cross-country train that took them to the Brethren National Youth Conference in Indiana (what is now known as Momentum Youth Conference). At the conclusion of the conference, Dan’s brother took the train back home, and Dan worked in Indiana until classes started.

“I knew that cancer was serious, but I don’t recall being afraid,” said Dan. His mom sent him postcards during that time, and he noticed that her handwriting got progressively worse and worse. That cued him in on the toll that chemotherapy had taken on her.

But he would never be prepared for the news that met him on the first day of class outside of McClain Hall. “That was a place and time that my life was altered forever,” he recalled.

After Dan took the phone call with his dad, Leslie took him to the airport. “By the time I laid my head down that night, I was in my own bed at home,” said Dan.

After the viewing and the funeral that weekend, Dan remembers telling his dad, “I don’t think I really want to go back at this time.” His dad responded, “Your mom would have wanted you to follow through. She wouldn’t want you to give up.” And that was that. Dan arrived back in Indiana on Sunday night. Pastor Moore picked him up and he went to class the next day. 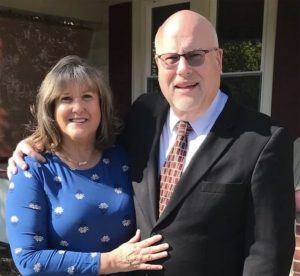 Very difficult days followed. As Dan worked and studied in Winona Lake, he was increasingly grateful to have the Moore family there with him as well as several young married couples from his home church. Although his time at Grace wasn’t easy, the Lord was using it to prepare him for his future.

“At Grace, I learned that the inspired word of God has everything I need for life in faith,” said Dan. “God instilled in me an understanding that this world is something we’re passing through. Life happens, and we have to go through hard things but that makes us more like Jesus.”

Dan not only grew in his walk with the Lord, but he also made some of the dearest friends that he still has to this day. And one of those friends, Judi, became his life partner.

In 1976, Dan graduated with his Master’s of Divinity. And in 2005, he worked to get his Doctorate of Ministry which was conferred in 2011. After eight years in Winona Lake and three Grace College degrees, Dan is not exaggerating when he says, “Grace has had a profound influence on my life in ministry. God was the one orchestrating the things in my life. Not in vengeance, but to make me more like Jesus. And his grace has been exceedingly abundant.”

When Dan drove off Grace’s campus in 1976 to begin his career in ministry, God’s plan to use and redeem Dan’s loss became more clear.

Eight years and two churches into his pastorate, Dan was burnt out. He took a temporary job with a lumber mill in Portland, Oregon, and had applied for a long-term position there–thinking this was the end of his pastoring vocation. The day he heard back that he had received the position, he called home to his wife who had some news of her own. “Don’t take the job yet,” she said. She had gotten a phone call a few moments earlier from a church in York, Pennsylvania. They requested that Dan candidate to be their pastor. The timing could not be more divine; Dan faithfully pastored that church in York for 27 1/2 years.

Now, Dan works at Lancaster Bible College as a Student Caregiver which he has done for the last six years. His role includes giving students Biblical advice, helping them work through hard circumstances, and preparing them for ministry. Dan works specifically with young adults in pastoral/professional ministry and students who are going through tough seasons–two things he knows inside and out. He is able to point back to everything in his life so far and see how God is putting it to use.

To this day, Dan continues to let God use his story of unthinkable loss and unthinkable grace for His unthinkable plans. – from grace.edu