Until the Last Day 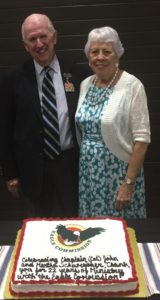 The Schumachers were honored on July 26, 2017, at Access2017, the national conference of the Fellowship of Grace Brethren Churches.

John Schumacher was overseeing a group of wild teenagers at summer camp in the San Bernardino Mountains outside of Los Angeles, Calif. when he first felt led to become an Army chaplain. At the time, he was assistant principal at a Christian school in Whittier, Calif., as well as youth pastor and music pastor at the Community Grace Brethren Church (Richard Todd, current pastor).

“As I looked down the road to think, ‘Where am I going? Where am I headed?’ something began to stir in my heart,” Schumacher recalls. He remembers leaving a group of rowdy campers early one morning and heading down to the office of the camp director, Wayne Flory, who had served in Korea as a chaplain. At the camp his title, chaplain, remained.

“It’s crazy, but when I heard the word ‘chaplain,’ I had not a doubt in the world that I knew exactly where I was headed,” said Schumacher. “It was so dramatic that, as I told [my wife] Martha as I walked her back to her cabin that evening, she put her head down on my shoulder and began to cry. But the next morning she told me, “I know I’m going to go wherever you go. I’m just so shocked.”

It was the beginning of a long journey. After his realization in the San Bernardino Mountains, he and his wife moved to Winona Lake, Ind., to attend Grace Seminary. In the summer of 1965, he went on active duty at Fort Meade, Md., joining the 11th Armored Cavalry Regiment as their chaplain, endorsed by the Fellowship of Grace Brethren Churches (FGBC).

By the following summer he was on a troopship to Vietnam. Reeling from the weight of the situation, and struggling from lack of encouragement from others, Schumacher questioned his desire to become a chaplain. Had he made a mistake?

“I came home from Vietnam and felt pretty rattled from what I saw and experienced,” he admits. He was discussing this with his wife when she told him, “Unless you feel that God is done with you in the military, you have no business looking for other opportunities.”

“The next day I rolled out of bed, and it was like I’d been struck by lightning…if I was called into the military to be a chaplain, I had to be there when it was bad and when it was good. And that helped me put things in order.”

Two years after he got back from his first tour, Schumacher was on his way back to Vietnam.

“From that point on, I had no more decisions to make about staying in [the military]. I knew I was where God called me. There wasn’t anything else that could fulfill me like the life of a military pastor, and so I stayed in.”

Schumacher left the army with the rank of colonel, after serving 30 years active duty, the maximum number of years a colonel is allowed to serve.

“Many people told me to get out, resign my commission and not stick around,” he recalls. “They told me if I resigned my commission, I wouldn’t have to go back to Vietnam a second time. It didn’t work.”

“I stayed until the last day.”

In the summer of 1995, shortly after his retirement, Schumacher became endorsing agent for the FGBC, (a position that allows the endorser to affirm that potential chaplains have met the requirements of the denomination to serve in the military) and served 22 and a half years, becoming one of the longest-serving endorsing agents in military history. During that time, the FGBC chaplain agency went from endorsing four chaplains to today’s more than 20. Schumacher says he has no regrets.

[Connect:]
Send a note of encouragement to the Schumachers at chaplainschumacher@cox.net. Check out Schumacher’s book, “A Soldier of God Remembers,” available on Amazon here.