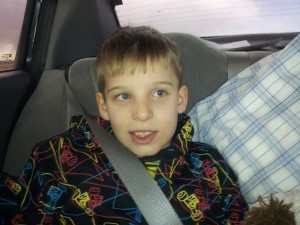 Several weeks ago, Lyndan Edwards, nine-year-old son of Canadian church planters Oliver and Cheryl Edwards, was diagnosed with a cavernoma, a blood vessel overgrowth. On March 14, he underwent surgery to remove the cavernoma. Here is an update, sent  by GBCanada.

Oliver writes:
“Thank you for your powerful prayers for our son, Lyndan!  I can’t describe how amazing it has been to see people from all over the world pray for us and contact us with love and support in this time of crisis.  Your prayers have been effective!  We have been riding a roller coaster from the first MRI which was interpreted initially as an inoperable glioma which would probably have been fatal, to Alberta Children’s Hospital where it was determined that it was a cavernoma, still very serious because of where it was located (on his brainstem in the center of his brain) but operable.  After 6 days in the hospital post-surgery, which lasted 5 hours in one of most advanced, computer assisted operating theatres in Canada, Lyndan is now home with his family!  We have returned home much faster than even the doctors anticipated.  Lyndan has a scar running from halfway up the back of his skull to halfway down his neck, but he is doing great!  His only remaining aftereffects of the surgery are slight doublevision, balance issues and a tendency to throw up if he eats too much too fast.  All of these symptoms are ebbing daily.  We couldn’t be happier, and are sure he will be back to his old self before summer.  God is the great physician!”

Please take some time to pray for Oliver & Cheryl and Grasslands Community Church at this time. Pray for Lyndan and for the doctors. You can stay connected to them on Cheryl’s Facebook page or you can e-mail oliver@grasslandschurch.com. Thanks for praying for them.