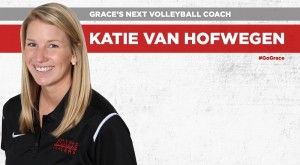 Grace College announces that Katie Van Hofwegen will serve as the next volleyball head coach for the Lady Lancers.

Van Hofwegen comes from The University of Virginia-Wise (NCAA Div. II) where she served as the top assistant coach since 2012. She has a wide berth of volleyball experience that spans across the country.

Van Hofwegen played collegiate volleyball at Shorter University (Ga.). An accomplished defensive player, she was honored as the Southern States Athletic Conference Libero of the Year in 2010 and was a two-time All-Conference winner. She graduated as the school’s all-time leader in service aces (163) and was a Daktronics-NAIA Scholar-Athlete with a 3.5 GPA. She also finished school ranked No. 2 in career digs with 1,536 and has the school record for most service aces in a single season with 66.

“We are very excited with the outcome of our coaching search. Katie Van Hofwegen has a tremendous background in volleyball and has enjoyed success both as a player and coach,” said Grace athletic director Chad Briscoe. “She is a teacher of the game and is fully committed to assisting student-athletes grow in all aspects of their life during their college experience. I look forward to watching our program grow and achieve success both on and off the court under her leadership.”

While at Virginia-Wise, Van Hofwegen assisted the school’s transition from NAIA to NCAA Div. II. She helped the program overcome a 7-25 record in 2012 to earn its best season in seven years during the 2014 campaign. She was responsible for recruiting, travel coordinating, game tape exchange and practice planning for the Cavaliers. She helped secure one of the best and largest recruiting classes in program history.

“I’m excited to start this new chapter at Grace College,” Van Hofwegen said. “The volleyball program has a great tradition of success, and I plan to continue building on that tradition. I’m looking forward to meeting the team, sharing my faith with them, and leading them both spiritually and as volleyball players. I’m really grateful for this opportunity, and I’m ready to get started.”

Van Hofwegen takes over a volleyball program that has racked up 106 wins over the past four seasons. The Lady Lancers have advanced to three NCCAA National Championships since 2011, including two trips to the national semifinals (2011, 2014). Doug West, who served as the interim coach during the national coaching search, will remain on Grace’s staff as the top assistant under Van Hofwegen.