Michael Pumphrey, pastor and church planter of Awaken Church in Virginia Beach, Virginia, has alerted us that his church, which is part of the Chesapeake District, is getting ready to enter into a new area of ministry as a church fighting against human sex trafficking.

Pumphrey says, “We have bought the rights to show a film called SEX+MONEY and have rented out a movie theater to help build awareness about local trafficking.  We have been in contact with local justice initiatives and law enforcement to hold a panel discussion at the screening.  This will be one of many screenings we will be doing over the next year to help build awareness and partnerships as we try to combat the issue here locally, which is larger than most would realize due to the ports and tourism and navy cultures.”

Pumphrey says his church considers these screenings only the first phase in what they want to see accomplished.

More information about the film may be found at http://sexandmoneyfilm.com/ 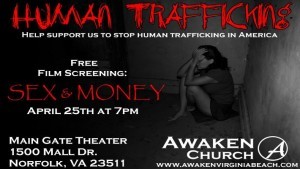