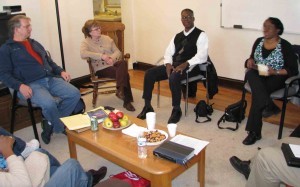 Ray Miller, second from right, shares about his ministry in Toledo, Ohio. To his right is his wife, Betty. Also pictured are Tony Webb, left, executive director of VisionOhio, and Cheri Boehm, staff member with VisionOhio.

Six couples who are willing to be involved in seeking God for new Grace Brethren churches in African-American communities in Ohio recently met to determine how to proceed.

The group gathered November 20, 2010, in Dublin, Ohio, and spent time learning about each other’s ministries. The session is a result of the 2020 Future Story of VisionOhio, the regional Grace Brethren church planting ministry, which calls for a network of black congregations among the Ohio Grace Brethren churches.

“We are using a tried and true approach for movement development,” says Tony Webb, executive director of VisionOhio. “We call it vision/fraternity/prayer. The most needed piece is prayer; the most fragile piece is fraternity and the vision piece comes as we do the previous two well.” 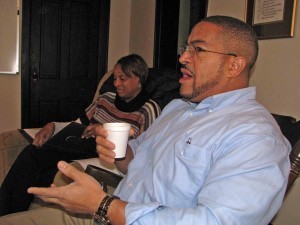 Stephen Joyce is leading the effort to plant Grace Brethren churches in African-American communities in Ohio.

Stephen Joyce is leading the effort and the group plans to meet again in February 2011.

Tony requests prayer for this fledgling movement within the Fellowship of Grace Brethren Churches. “Pray for the harvest and workers in it, particularly in the African-American communities in Ohio,” he says. “Pray for each member of the team and for the networking side of the equation.”

Click here for a video of Stephen challenging the group.