Visitors, Concerts and Passings on a Winona Weekend 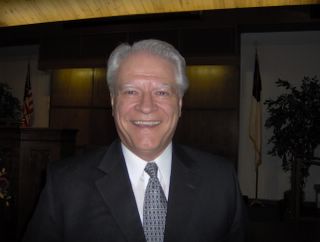 A weekend of stunningly gorgeous midsummer weather set a perfect backdrop for interesting visitors and events in Winona Lake, Indiana. Larry Poland (pictured) was among the guests. In town to visit his father, Frank, who is a resident of Grace Retirement Village, Larry gave a presentation Sunday evening about his organization, MasterMedia International, whose ministry is evangelism and discipleship among the decision-makers in the film, entertainment and media world in Hollywood. Just one event they are planning is a media prayer breakfast, to be held Friday, November 4, 2005, at the Century Plaza Hotel in Los Angeles, with some 1,200 media leaders expected to attend. Further information is available at www.mastermediaintl.org.

A number of Grace alumni guest families were in town over the weekend, including Ron and Alice Kinley, Larry and Donna Lynn Poland, Ward and Kris Kriegbaum, and others. David S. Miller (Robert and Althea’s son) and his wife, Carol, rolled in from Columbus, Ohio, on their Honda GoldWing to enjoy a weekend of music and ballet at the MasterWorks Festival.

The Festival now enters its final week. Over the weekend performances included some very creative ballet, including Prokofiev’s “Peter and the Wolf.” Saturday night’s program included winners of the concerto competition (marimba and piano) and a bombastic rendering of the Tchaikovsky Fourth Symphony, directed by one of the nation’s leading women symphony conductors, Miriam Burns. The festival closes this week with the Theater Troupe doing “Anne of Green Gables” and orchestral performances which include the Rachmaninoff Second Symphony, the Tchaikovsky Violin Concerto (David Kim, soloist), and the Beethoven Emperor Piano Concerto (No. 5) with Christopher Harding as soloist.

In the week ahead, here at the BMH offices we will be putting the next issue of “Sharpening One Another,” the newsletter for the Association of Grace Brethren Ministers, into the mail, and will be continuing to draft the daily newsletters for Equip05 national conference, which begins July 31. We expect to take delivery this week of “Heroes Who Live On, Volume 2” book, and Dr. Homer Kent, Jr.’s revised commentary on the Gospel of John (“Light in the Darkness”) went to press Friday and should be available in time for Equip05.

Yesterday (Sunday) afternoon George Hawkins went to be with the Lord. Among George’s children is Tim Hawkins, GBIM missionary to Portugal, and memorial services will be held later this week at the Winona Lake Grace Brethren Church. Both Mary Thompson (wife of the late Bud Thompson of GBIM) and Dr. Bill Walker (retired physician-missionary-to-Africa) will have major surgery this week. Dr. Randy Smith (pastor of Sebring, FL, GBC) was in town over the weekend, speaking three times at WLGBC.

This coming Saturday Sandy and Steve Barrett’s daughter, Amber, gets married in an outdoor ceremony on Rainbow Point in the yard of Dr. Mike and Becky Grill. Sandy is administrative assistant to Fellowship Coordinator Tom Avey and is also the daughter of retired pastor Gilbert Hawkins. The next day, Sunday, Rainbow Point will again be the site of an outdoor baptism by Winona Lake Grace Brethren Church.

Next week is the GBIM “Family Reunion,” and then Brethren National Youth Conference starts at Cedarville University in Ohio on Saturday, July 23. The Equip05 registration opens Sunday, July 31 in the afternoon and continues through Friday afternoon, August 5.