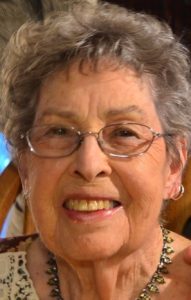 Vivian R. McClellan, 88, died Saturday, December 1, 2018, at The Carriage House in Titusville. Vivian was born in Whittier, Calif.. She lived in California, Ohio, New Mexico and Washington state before moving to Titusville, Fla., two years ago.

Vivian attended Biola, a Bible college in Los Angeles, Calif., and was joyful in serving as a pastor’s wife and missionary for much of her life. She was a kindergarten teacher and taught ladies’ Bible studies for a number of years. Vivian really loved people and delighted in mentoring, counseling and serving others. She was known for her generous, open-hearted hospitality and her talented creative writing. Vivian wrote and published several Christian novels and published a regular newspaper column of her poetry for several years. She and her husband were actively involved in SOWERS (Servants On Wheels, Ever Ready) an RV helping ministry, and traveled the U.S. ministering in schools, camps and churches.

The combined Celebration of Life service for the fruitful and loving lives of Jim and Vivian will be held at 2:00 p.m., Sunday, December 9, at Christ Community Church, 4295 Garden Street, Titusville, FL 32796.