When an active faith is intentionally integrated into one’s vocation, it opens up exceptional possibilities for holistic impact. The story of June Cashmere, a company that sells high-end luxury cashmere yarn from fiber sourced in Kyrgyzstan, is a perfect example of this. 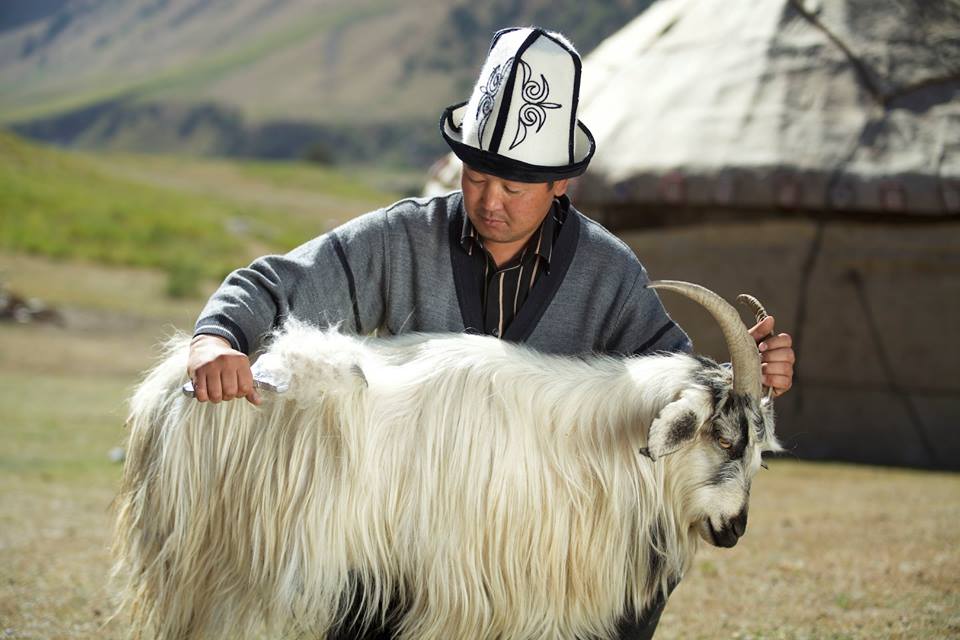 The people living in the mountain valleys of Southern Kyrgyzstan depend on their livestock as their primary source of food and income. Research projects by developmental organizations had demonstrated that a significant amount of the cashmere produced from the local Kyrgyz goat breed has quality characteristics on par with the best in the world. Yet virtually nothing had been done to follow through with helping individual households realize the economic potential of their cashmere.

The Christensen family of Wooster, Ohio, owners of Morning Star Fiber, a mini-mill for fiber processing, became aware of this situation in Kyrgyzstan in 2007. They had opened their company with a strong conviction that it should be committed to and aligned with the Creator’s purposes and operated according to His values. When an opportunity presented itself to use their knowledge and connections to be a catalyst for revitalizing the Kyrgyz fiber industry in a way that would help the shepherds, they began to share their vision for making this happen. It was through mutual friends that Sy Belohlavek from Columbus, Ohio, heard about this idea and ultimately moved with his family to Kyrgyzstan in late 2010 to begin working towards actualizing the vision.

At the time very few Kyrgyz shepherds understood what properties influenced the dollar value of cashmere, let alone about its value in the world market. Chinese buyers had a monopoly in Kyrgyzstan, buying all the cashmere based on weight rather than by quality. For the Kyrgyz cashmere industry to thrive, shepherds needed to be educated about cashmere in general, trained how to breed their goats for better cashmere, and shown how to properly collect and sort their fiber by quality grades. The Kyrgyzstan business, managed by Belohlavek, developed education and training programs addressing these issues across the region.

This business began purchasing cashmere directly from the shepherds in 2013 and has, year by year, progressively bought larger amounts of cashmere, which is then sent to Europe for processing into yarn by highly respected textile mills, then to the U.S. to be dyed and prepared for purchase as knitting yarn. June Cashmere was launched by Belohlavek in the U.S. to serve as the retail outlet for this high-quality product.

The development within the Kyrgyz cashmere industry has already resulted in the shepherds being paid up to a 30 percent higher price for their cashmere and June Cashmere is helping Kyrgyz cashmere develop a distinct and honored identity amidst the world’s finest fibers.

Response from industry insiders to both the quality and the backstory of June Cashmere yarns has been very positive. As the company grows in sales, its ultimate aim is to be in a position to harness the high value of the cashmere and reinvest back into the communities of the Kyrgyz where it is sourced. This will be done by contributing towards village infrastructural needs and by investing into entrepreneurs of high character to generate new local businesses, which in turn can provide more employment opportunities.

From the beginning the personal faith of those involved has played a central role: it has served as the foundation for perseverance in a long-term process, as the guide for navigating the constant challenges all along the way, and informs the template for how the company seeks to maximize the holistic benefits it can achieve for the community through its commercial success.

To buy high-quality, luxury yarn and to partner with June Cashmere’s work with the Kyrgyz people, visit their website at junecashmere.com or like them on Facebook. —this story was contributed to by Adriana Maxwell.

Adriana Maxwell hails from southwest Michigan and worked as an intern at Grace Connect during her time at Grace College. She graduated this past May.