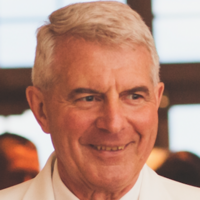 Ward A. Kriegbaum, 79, of Wheaton, Ill., died Friday, June 18, 2021, at Tabor Hills Health Care Facility in Naperville, Ill.. He had been in declining health the past several years.

Kriegbaum was born May 2, 1942, in Long Beach, Calif., to Arnold and Laura Kriegbaum. He married the former Kristin Adair Auxt of Hagerstown, Md., on August 21, 1965. August of 2021 would have marked their 56th wedding anniversary.

A graduate of Warsaw Community High School in Warsaw, Ind., he attended Wheaton College and was awarded a bachelor’s degree in history by Grace College, Winona Lake, Ind., in 1964. He went on to earn a master’s degree in psychology from Indiana University in Bloomington, Ind., and a Ph.D. degree in higher education administration from Purdue University in West Lafayette, Ind..

After brief employment by Grace College and by LeTourneau College (now University) in Longview, Tex., he joined the administration and faculty of Wheaton College, where he served the next 36 years in various positions, including Dean of the Faculty, Vice President of Academic Affairs, and in student affairs positions. He was honored by the Wheaton administration upon his retirement in May of 2007.

Ward was a beloved figure in his work with students and faculty on the Wheaton campus. In addition, he oversaw the leadership of Honeyrock Camp, a Wheaton College camp in upper Wisconsin. He also served in leadership of the Wheaton Football Ministry Program (WFMP) in which he traveled to many countries ministering and mentoring students. Students and faculty alike testify to his indelible impact on their lives.

In recent years he and his wife served in leadership of the Eastern European program for adult students, in which Eastern European students are brought to the U.S. to spend six weeks under the leadership of Wheaton faculty hand-chosen by Kriegbaum for mentorship. The Eastern European Tutorial is under the auspices of Faith and Learning International. Ward made it a point to get to know each participant personally, thus leading many to return to the U.S. to visit and to be hosted by the Kriegbaums during their stay.

Kriegbaum was an avid football fan, having played in high school and at Wheaton College. He was a staunch supporter of Wheaton College football, thus leading to his travel to many countries with the team. He was a lover of overseas travel, which began when he was 20 and joined Gordon College for their summer program traveling throughout Europe.

As senior vice president at Wheaton College, he made many trips abroad and was the college’s representative in establishing Daystar University in Nairobi, Kenya. Many faculty members traveled there to serve in teaching roles for short periods of time, and the original degree from Daystar was awarded by Wheaton College. Eventually the university became independent, awarding its own degrees.

He was an accomplished horseback rider where he enjoyed riding at Lost Valley Ranch in Colorado and at Honeyrock Camp in northern Wisconsin. He had a dear friend in Wheaton who owned several horses and took him riding on a regular basis.

Kriegbaum was a member of, and active in, the Glen Ellyn Evangelical Church in Glen Ellyn, Ill.

In addition to his wife, Kriegbaum is survived by a brother, Richard (Peggi) Kriegbaum of Fresno, Calif., and a sister, Karen (Chuck) Bragg, of Fishers, Ind.. He is also survived by two daughters, Courtney (Kent) Graham of Wheaton, Ill.; Stephanie (Dan) Waldron of Naperville, Ill.; and a son, Matthew (Evie) of Arroyo Grande, Calif., and nine grandchildren. He was preceded in death by his parents and an infant daughter, Adair.

A private ceremony is pending. The family would like to thank each of the many individuals who have impacted and shared in Ward’s life. Any letters of memory, or tribute to Ward will be read aloud at his ceremony, and can be sent care of Stephanie Waldron at 204 Claremont Dr. Naperville, IL 60540 or emailed to swaldo8@comcast.net by July 12, 2021. Family and friends may sign a guest book at hultgrenfh.com. For more information, please call Hultgren Funeral Home at 630-668-0027.

In lieu of flowers, the family requests that if you feel so led to give to an organization in his honor it would be Wheaton College where he spent his life serving and loving faculty and students.