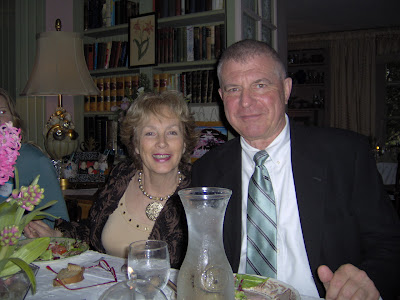 Dr. Ward Kriegbaum (right) was honored this past Thursday night with a festive dinner at the Oscar Swan Inn in Geneva, Illinois, upon his retirement from the administration of Wheaton College, Wheaton, Illinois, where he has served for the past 36 years.

During that time he has served in various administrative capacities including dean of the faculty, academic vice president, and more.

Ward Kriegbaum is married to the former Kristin Auxt of Hagerstown, Maryland, who is also a Grace alumnus, and they have three adult children. Their daughters, Courtney (Graham) and Stephanie (Richter) live near them in Wheaton, and their son, Matt, lives in Phoenix.

Kriegbaum was honored by many tributes and speeches at the dinner, which was attended by approximately 100 Wheaton faculty, deans, administrators, former presidents, and others who have known and worked with him throughout his academic career. The event was emceed by Dr. Harold Best, a longtime friend and colleague who for many years was dean of the conservatory of music at Wheaton College.