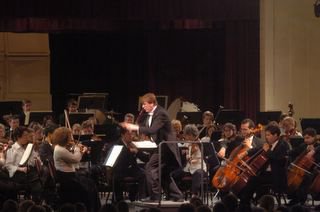 Symphony Names Board Of Directors

The Warsaw Symphony Orchestra, having presented three successful concerts in the fall, is now creating a board of directors to oversee its operations.

Dr. Patrick Kavanaugh, the orchestra’s founder and conductor, is excited to see the group take this next step.

“A great orchestra needs a great board of directors,” said Kavanaugh. “A solid group of Warsaw’s movers and shakers will ensure the future of the cultural advancements in this community. I’m especially gratified that such dedicated leaders as Rebecca Kubacki and Cathy Teghtmeyer are putting the board together.”

The next concert is Feb. 25 and will present Beethoven’s “Fifth Symphony,” the “Suite” from West Side Story by Leonard Bernstein and soloist Jennifer Jackson in Mozart’s “Piano Concerto in Eb Major.”

Performances are in Rodeheavor Auditorium and are free of charge.

Community members say they are excited about the new orchestra.

Brent Wilcoxson said, “With all that has happened in this area in the last few years – the MasterWorks Festival and many other organizations that have enhanced the cultural climate – having a full orchestra is perfect for our community.

“A symphony orchestra is a real plus to the corporate community as well. Having such a cultural asset nearby will make it far easier to recruit top talent to our many businesses. This is a win-win situation for everyone.”

Ron Manahan, president of Grace College, said, “I think it is wonderful that Dr. Kavanaugh has starting the Warsaw Symphony Orchestra. It will be extremely important for the community, for Grace College, and for the culture of the entire area. I look forward to seeing dozens of our students performing in this orchestra, side by side with musicians of all ages from throughout Kosciusko County.”

Kavanaugh, who writes a weekly column for the Times Union (“This Week in Music”), has stood before orchestras for many years. In addition to conducting the MasterWorks Festival Orchestra – both here and in Europe each summer – he has been the conductor of Washington, D.C.’s Asaph Ensemble, the Patrick Henry Orchestra, the University of Maryland’s 20th Century Ensemble and the CUA Orchestra.

He has frequently conducted in the Kennedy Center, Constitution Hall, the Center for the Arts and many other concert halls. In 1993, Kavanaugh became the first American conductor invited by the Russian government to conduct at Moscow’s historic Bolshoi Theater.

In 1984, Patrick and Barbara Kavanaugh and a few other professional musicians founded the Christian Performing Artists’ Fellowship where he serves as executive director. This organization has produced dozens of major concerts and sponsors the MasterWorks Festival each summer. Kavanaugh and his family recently moved to Kosciusko County from northern Virginia.

“We love this part of the country,” he explained. “The people here are hard working, devout and patriotic – and they also have a great love of music. What better place to create the pinnacle of musical ensembles: a symphony orchestra.”

When he is not making music, Patrick Kavanaugh is usually writing about it or speaking to groups about the joy of music. He has lectured at many universities, churches, the White House, the State Department and he has appeared on many television music and talk shows.

He currently teaches a music appreciation class at Grace College. Among his nine published books are “The Spiritual Lives of the Great Composers,” “You Are Talented,” and “Raising Musical Kids.” Kavanaugh is married to Barbara, a professional cellist. The couple’s son, David, is at home.

For more information about the new Warsaw Symphony Orchestra, call 574-267-1888.