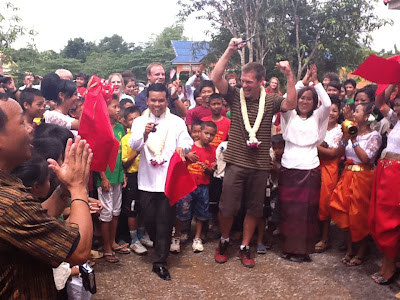 Pastor Jim Brown and a team from Grace Community Church, a Grace Brethren congregation in Goshen, Ind., are in Cambodia and Thailand ministering at the orphan homes they sponsor through Asia’s Hope. Yesterday, after saying their good-byes in Battambang, they headed for Phnom Penh.

John McCollum, executive director of Asia’s Hope, tells the story on his blog:

Shortly after being dropped off at the Battambang bus station, they encountered a mob. Apparently, it was led by a group of thug police officers who were intent on disrupting service because the bus company had failed to pay the full amount of their bribe. Nice.

Unfortunately for the team from Goshen, Indiana, they were in a pretty major time crunch with a tight connection in Phnom Penh, leaving them very little time to spare. They were in danger of a very expensive set of missed flights to Chiang Mai, Thailand.

Fortunately for them, Savorn (Asia’s Hope Cambodia national director) heard about the disruption, headed to the bus station, rescued the team and rented them a van to Phnom Penh. I just now heard that the team made it to the airport — just in time.

Now, here’s the rest of the story from Pastor Jim’s blog. It picks up after the Goshen team had said emotional good-byes to the children in Battambang:

15 minutes later some corrupt thug policemen stood in the middle of the road and motioned for our bus to stop. The driver refused to turn like they wanted him to and the mob grew. The thugs began beating on the front of the bus with Billy clubs, pounding on the grill, headlights, glass door. We inched forward and they called in more bullies soon it appeared as if every Cambodian within the province of phnom penh was lined up. The thugs backed a truck up against the bumper of our bus, it was a showdown like most will never experience. Shouting, and bantering escalated it was good vs evil.

We were headed to Phomn Penh on a tight schedule with little time to spare. We didn’t have a translator with us and found ourselves right where God wanted us. I stood up and said to our team calmly “this is our chance to watch our God come through for us, this is our chance to watch our God win, this is our chance to pray.” I said we should not waste this moment, It is God’s moment to shine. Immediately the team prayed, Bibles were opened, team members quoted scripture, individuals sang worship songs. There was nothing physically we could do, but we knew that those that were with us were greater then those that were against us. The team never  panicked, never feared, they were ready for this moment.

Out of nowhere as if he were dropped from the sky above stood Savorn, he marched in and you could witness the anointing of God on his life. People gave him immediate respect, even the thugs, it was as if the eyes of these thugs saw a man ten foot tall. Before we knew it we were ushered off the bus in a mob of people and whisked away to a minibus, that transported us  4000 mph to Phomn Penh. We made our flight with 20 minutes to spare.

So how did you spend your morning? We serve an amazing powerful God who loves to show his power. As I type now from Thailand I recall what I said to our team, “we just added another chapter to the book of Acts. Good night for now. Our God is greater, bigger, and stronger!

Read the complete story on the Asia’s Hope Director’s blog or TheBrownBytes.