David DeArmey, operations director at Water for Good, has received the top prize,  a Raleigh Revenio Carbon 1, in the 2014 Aegis Citycard Cycles Challenge. He participated recently in a 100km ride with the Central African Republic’s national cycling team through the streets of Bangui. (Water for Good is a cooperating organization in the Fellowship of Grace Brethren Churches.) A portion of the story about the ride, from the Aegis Trust website, appears below. Click here to read the complete article. 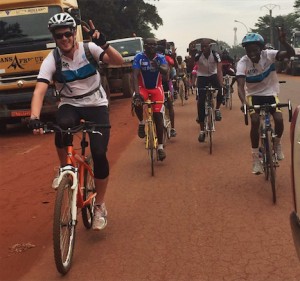 16 Oct 2014 – After raising almost $2,000 in sponsorship for an incredible 100km ride with the Central African Republic’s national cycling team through the streets of Bangui, the country’s war-torn capital, development worker David de Armey (pictured, left) has won the draw for the top prize in the 2014 Aegis Citycard Cycles Challenge – a Raleigh Revenio Carbon 1, one of the famed bike manufacturer’s carbon fibre racers from its 2015 range.

Operations Director at ‘Water For Good’ – a US-based charity which has been drilling wells and maintaining water pumps in the Central African Republic (CAR) for the last ten years – David undertook the ride to raise funds and awareness for both Water for Good and the Aegis Trust. Aegis is now working with partners in CAR to strengthen peacebuilding in the country, where tensions remain high following severe interreligious violence – which has flared again in just the last few days. Over five thousand people have been killed and more than a million driven from their homes in the country this year.

“Biking with Central Africans in Bangui was like reclaiming different parts of the city that had been affected by the civil war,” says David. “All the neighborhoods we biked through – every district, road, street corner – have been marred by tragic events.