In late September and the early weeks of October, Hurricane Matthew ravished the coasts of Haiti, Cuba, the Dominican Republic, and the southeastern United States. Lasting for days, the tropical storm became the deadliest Atlantic hurricane since 2005, responsible for more than 1,600 deaths.

In the wake of the tragedy, Grace Brethren pastors in Florida met to strategize how they could lend a helping hand to those whose homes and resources were ravaged by the storm.

“We discussed many options to specifically get help to Grace Brethren churches in the interior of Haiti, removed from Port a Prince and Cap Haitian,” explained Dr. Rich Schnieders, lead pastor of Friendship Grace Brethren Church in Ft. Myers, Fla., and chair of the Florida District Ministerium.

The pastors discussed several options and decided on a course of action: working through the Haitien pastors from Florida and their counterparts in Haiti, as well as nonprofit Grace Brethren organizations Caribbean Vision Ministries and Breathe Partners, they would collect cases of water at their eight individual churches and have the cases transported to Haiti. This hands-on, boots-on-the-ground approach was very intentional.

“We did this in an effort to connect our people together,” noted Schnieders. “With every case carried into a Florida Church, there would be additional connection between the Florida churches and the Haitien churches.” 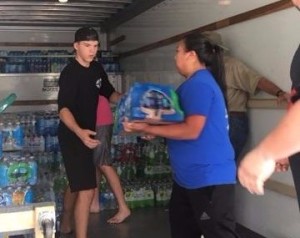 The response was overwhelming. The drive, conducted at the end of November, brought in more than 50,000 bottles of water, destined for the eight Grace Brethren congregations in the Lascahobas area of Haiti – in the mountains close to the Dominican Republic.

A crew of men from Friendship Grace Brethren Church collected the bottles and delivered them to Mispa Missionary Community Church in Miami, where the donations were prepared for shipment and distribution in Haiti.

“We had so much water at the first three churches we filled the truck,” said Schnieders. “Pastor Desir Nonnhome [pastor of Mispa Missionary Church] called me and said that there was so much more water than they thought and they were out of room. They had to scramble to find another location offload the two other loads. This project has turned out to be much bigger than we could have thought.”

Schnieders said the words of Ephesians 3:20 were brought to mind as the project unfolded: “Now to him who is able to do immeasurably more than all we ask or imagine, according to his power that is at work within us.”

He is confident that the massive success of the project, and its hands-on approach, will translate into prayer and further involvement in ministry for Haiti.

“Would it have been easier to collect money and purchase water in Haiti? Yes, but that would not have built the spirit of involvement and prayer that carrying the cases of water has done. Our churches have been blessed through this water project which we believe will translate into further blessing for our Haitien brothers and sisters.”