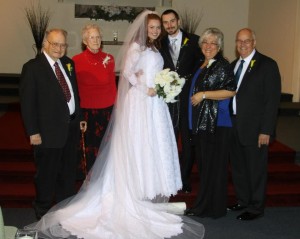 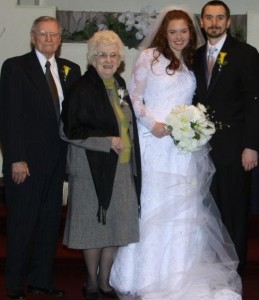 The wedding of Doug and Ladeen Zielasko on November 24 joined four Grace Brethren missionary families: the Zielaskos, the Goodmans, the Covers, and the Futches.

Doug, the son of John Zielasko and the late Suzan (Goodman) Zielasko, is the grandson of Jack and Jean Zielasko (former missionaries to Brazil and former executive director of the Foreign Missionary Society of the Grace Brethren Church, now Encompass World Partners), and of Marvin Goodman and the late Dorothy Goodman (former missionaries to Africa).

Ladeen is the daughter of Bob Jr. and Lisa (Futch) Cover. Her grandparents are Bob and Joene Cover and Earl and Lita Futch (both couples formerly served in Argentina).

All four grandfathers participated in the ceremony in some way. “It was blessing and a priviledge not many couples get,” said Lisa Cover, mother of the bride. (Although Marvin Goodman wasn’t able to physically attend, his son, David, read a letter from him.)

The wedding was held at Community Grace Brethren Church in Warsaw, Ind. The couple is living in Winona Lake, Ind.