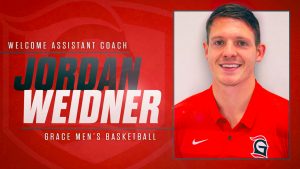 Grace’s men’s basketball team is pleased to announce Jordan Weidner as the next assistant coach for the Lancers.

He will serve as the lead assistant under head coach Scott Moore, and Weidner will also be the Director of the Gordon Health and Wellness Center.

Weidner is no stranger to the Crossroads League. He excelled as a guard for Indiana Wesleyan from 2010-14. He finished his career ranked third on the all-time scoring list with 2,224 points.

He climaxed his career by winning the NAIA national championship as a senior in 2014, being named the Most Outstanding Player in the process. He earned NAIA First Team All-American and Crossroads League Player of the Year honors as well in 2014.

“I’m excited to be a part of the Grace family. Grace College is a special place, and I am eager to see what God is going to do through the men’s basketball program,” Weidner said. “I can’t wait to build on the tradition and culture of this program with Coach Moore. My wife and I are very excited to be joining the Winona Lake community and look forward to making it home.”

Weidner continued his basketball career after IWU at the professional level. He was drafted No. 1 overall in the NBL Canada draft in 2014 by the Mississauga Power; he made the All-Rookie Team after his first season with the Power.

Weidner joined IWU’s coaching staff as a graduate assistant in 2017. He helped the Wildcats to two seasons with at least 30 wins, aiding IWU to an NAIA title in 2018.

“Jordan has a competitive drive and passion for the game. Although I never had the opportunity to coach Jordan, I’m extremely excited to be able to work alongside him,” Moore said. “He brings a wealth of basketball knowledge to our team, has a tremendous ability to relate to players and is grounded firmly in his faith. The Grace Basketball family gained a great one!” – from gclancers.com