Wes Miller, the youngest son of Grace Brethren (Charis Fellowship) pastor, the late R. Paul and Alverta Miller, has died. He was the only son (of 10 children) who grew to adulthood and did not become a pastor, according to his nephew, David Miller. “Although he never had “Rev.” preceding his name, he did as much for the kingdom of God serving as a godly churchman/businessman as did any of his pastoring brothers,” David said. Wes’s business, Wes Miller Associates, served many congregations in the Charis Fellowship with insurance products. 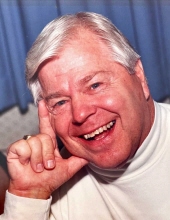 Wes is survived by his wife, Mavis [Brumbaugh] Miller. Wes and Mavis were married in Goshen, Indiana on August 9, 1959 and were close to celebrating their 62nd anniversary.

Wes and Mavis settled in Warsaw, Ind. Wes opened a TV sales and repair shop while also farming in his early adult years. Wes and Mavis owned and operated a farm north of Warsaw along with Monoquet Meadows Campground, at which all of their sons worked during the summers. Wes’s primary profession was being the owner of Wes Miller Associates, an insurance agency that served many individuals and business clients in northern Indiana as well as many pastors and missionaries around the world.

In 2010, Wes and Mavis sold their farm north of Warsaw and moved to Rochester, Mich., where they enjoyed many years together. Wes and Mavis were always “on the sidelines” supporting their grandkids, wherever they lived. Warsaw was their true, earthly home and they dearly missed their many friends in Indiana once they moved to Michigan, but kept up on all the news and events of Warsaw and surrounding areas.

Wes was known for his love of humor, his kind spirit and his hard work. His children were amazed by the file cabinet of jokes in his mind, which he drew upon until his final days. Many people over the years told his sons how much they trusted Wes and enjoyed knowing him, and of course his sense of humor.

While challenged with a lack of mobility following an auto accident in 1991, Wes never complained about his situation or challenges. One of Wes’s favorite verses was Galatians 2:20: “I have been crucified with Christ and I no longer live, but Christ lives in me. The life I now live in the body, I live by faith in the Son of God, who loved me and gave himself for me.”

He was a wonderful example of grace, kindness, and perseverance. We will miss him dearly but hold on to the hope we will see him again in heaven while remembering his love of Christ here on earth.

Memorial plans have not been determined at this time. In lieu of flowers, contributions can be made in Wes’s memory to Three Strands, PO Box 753, Winona Lake, IN 46590. Share a memory or send an online condolence at www.modetzfuneralhomes.com.