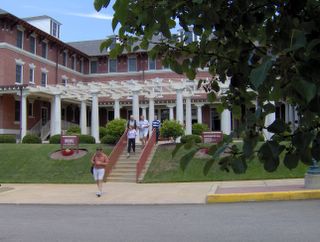 Kathy Gill, Special Events Coordinator for Grace College, invites all to attend a special Open House of the Westminster Hall guest rooms in Winona Lake, Indiana, on Wednesday, August 30, from 3 p.m. to 5:30 p.m.

Westminster Hall (formerly the Westminster Hotel) has guest rooms available for rental use by Grace employees, alumni, parents or students. The Open House will take place in the lobby and first-floor guest rooms of the historic building.

Refreshments will be served. The purposes of the Open House are to inform area residents of the availability of the guest rooms, to enable the public to see the newly-redecorated rooms and upgrades, and to share in a time of fellowship.

The rooms are furnished in Mission Oak style with a queen-size bed, private bath, cable TV, and free internet access. The room rate is $55 per night, including tax. To reserve a room, contact Grace’s Special Events Coordinator Kathy Gill at 574-372-5100, ext. 6501 or at kgill@grace.edu.

The stately Westminster Hall was built between 1905 and 1907 and was first known as the Westminster Hotel, serving as a denominational boardinghouse for the Presbyterian church. It was the largest and last of Winona Lake’s four hotels.

The building’s lower level originally contained, among other things, an experimental dairy laboratory, and the upper level contained an auditorium and cafeteria.

During World War I the building was used as a barracks for Camp Winona, a military training center where U.S. Army truck drivers and mechanics were trained.

In 1932, Homer Rodeheaver, a pioneer in gospel music and the renowned songleader for evangelist Billy Sunday, purchased the building to house his music company. In the 1940s the Westminster is credited with being a sort of “launching pad” for several international ministries. Youth For Christ was founded there, and toward the end of 1949 was the famous “Rainbow Room Prayer Meeting” which launched the Los Angeles crusade and ultimately the career of evangelist Billy Graham.

Grace College began using the building as student housing during the 1950s and 60s, and in 1970 the Free Methodist Church purchased the hotel, renamed it “International Friendship House,” and used it to house missionaries and as a denominational conference center.

When the Free Methodist organization moved its headquarters to Indianapolis in 1990, the building was closed and subsequently purchased by Grace College and Seminary in January of 1994. Extensive renovation has restored much of the grandeur of earlier days to the building.

Today it provides a combination of housing, offices, and student grille for Grace College, meeting space for community and corporate events, and it houses the Reneker Museum of Winona History, which features displays and historical artifacts from the history of the town and from the lifetime of Homer Rodeheaver.