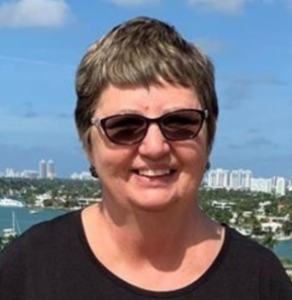 “It’s been the greatest journey ever. I wouldn’t trade it for anything!” says Debi Large of Okeechobee, Fla. She isn’t talking about the cruise she took a few months ago; she’s talking about the cancer diagnosis she received almost four years ago.

When her doctor informed her that she had glioblastoma, an aggressive brain cancer, he told her she might live three to six months, maybe nine with chemotherapy. She had always told her three sons that she would never do chemo. When they heard of the diagnosis, they begged her to try treatment to “give us some time to wrap our heads around this.”

She told them, “As long as I’m not sick or in pain, and it’s working, I’ll do it.” She comments, “I’ve not been sick or in pain from any chemo treatment this entire time.”

As she counts the blessings God has brought into her life, she looks back to several Bible studies she had participated in previous to her diagnosis. “Before, if you had asked me if I trusted God, I would have said ‘yes.’” However, in the process of the studies, she realized that God really loves her. “I came to a strong knowing of that truth—it became a part of my DNA,” she says.

Another truth came through a study of the book When Life is Hard by James MacDonald. “I realized I really can trust God. If it is in my life, and I’m not sinning, then God allowed it for my good and His glory,” she shares.

“When I received the diagnosis, I was not scared and crying as I would have been before His love and goodness were a part of my DNA. I’ve never had one day of fear—not an ounce of doubt that this is for my good.

“In fact, I thought I had my free ticket. I was reading every passage on heaven, thinking about everybody I was going to get to see. Then God started to heal me. I asked, ‘Are you serious, God?’ I was so disappointed! I ’m glad I can be here with my children and grandchildren, but if I go today, I’ll be one happy girl.

“For years I had prayed for my boys, that God would do whatever it takes for them to love Him with all their heart, soul, and mind. One of my sons struggled for years with alcohol and drugs, but thankfully God kept pulling him back. God got ahold of his girlfriend about a year ago and they have come to Him.”

Large has always felt close to her three sons, but all of this has drawn them together. “We talk all the time.” She adds.

“Shortly after the diagnosis, my first grandchild was due soon in Texas. I told the doctor, ‘I’m going to be there when he’s born.’ The doctor replied, ‘Go ahead, but make good memories, because you won’t go back again.’

“I’m getting ready for my fifth trip back, traveling to my son’s wedding. I’ve seen another grandson born and my younger son married. God is truly in charge of when you go. Even when you think you’ve gotten a ticket, it may not happen right away.

“When I heard the diagnosis, God said, ‘Are you going to trust me?’ It’s been the greatest journey ever. I wouldn’t trade it for anything. If God said we could rewind and not have this happen to me, I wouldn’t change a thing. The last three and a half years I’ve had a brain tumor, a divorce, and breast cancer. It’s true what they say about God’s timing: He gifted me with the trust I was going to need.

“As the doctor was telling me about the diagnosis, I was nodding my head and saying, ‘Okay.’ He looked at the friend who had come with me and asked, ‘Is she understanding the gravity of what I’m saying to her?’ I responded, ‘I can die tomorrow, but I’m not going until God says.’

“My doctor, who is Hindu, just kept shaking his head and telling me, ‘You have such a good attitude.’ I told him, ‘It’s because of my God.’ Now, if I say anything about how well I’m doing, he’ll say, ‘We know who it’s from,’ and points to heaven.

“Medical researchers want to do a study on why I’m doing so well. I keep telling them, ‘You know the first thing I’ll tell you is it’s God. My doctors know it’s coming, and say, ‘We know, but there has to be something else.’ They can’t understand it.

“There have been many benefits to living with this diagnosis. I’ve had more opportunities to witness in three-and-a half years than my whole Christian life put together. You don’t have to go looking for them—they just come to you. Recently I was hospitalized for kidney stones. A doctor came in at 3 a.m., pulled up a chair and said, ‘Tell me your story. I hear you have glioblastoma.’ I proceeded to tell him my testimony. His eyes got bigger and bigger and all he could say is ‘Wow!’

“Almost every day I get a Facebook message or a call about how my journey is affecting someone. It’s worth it just for that alone. The worse the situation is, the more people can see whether you’re living like you’re really wanting to glorify God. We all have a choice. We can whine and complain. I can’t walk and have to stay home a lot. I can’t stand that! If I could change something, it would be that I could walk better.

“But my limitations are nothing compared to what God has done. Several people tell me they have been saved from watching my journey. I’ve had people say they’ve picked up their Bible they hadn’t looked at in years, and others have told me they’re going back to church.

“The Bible says we’re supposed to look forward to heaven. We don’t live for this earth. I don’t sweat the small stuff. If someone wants to cut in front of me in line, I just give it to them now. People live for where they can go, what they can do, and what they can buy. I don’t want to be like that ever again.

“I love the old hymn, ‘It Is Well With My Soul.’ We don’t grow when things are going well. If we spend all our time trying to get rid of the hard things in our life, in denial or medicating or getting too busy, or if we complain or worry through them, we miss out. We need to embrace what God brings because that’s how we are going to grow. And growing should be exciting!

“In the good times we say we trust God. But it’s when you’re in the bad times that you find if you really trust Him. You can’t trust and worry at the same time. Our go-to is worry; God wants us to go to Him.”

Debi Large was part of the Grace Brethren Church of Okeechobee in Florida when they first moved there before it closed. You can follow her journey on Facebook by joining “Prayers for Debi.” – written by Viki Rife, from wgusa.org