White Provides Perspective of the Past While Looking to the Future

Terry White, who served as executive director of the Brethren Missionary Herald Company from 2003-2009, is featured in the July issue of Senior Life, a free newspaper which is distributed in Kosciusko County, Ind. A portion of the story appears below. Click here to read the complete article (on page 2).

‘History Guy’ helping to steer Winona Lake into the future 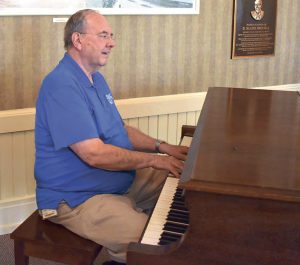 Talking to Terry White about the history of Winona Lake can be a dizzying experience, especially if you are not from Winona Lake. White is chief docent at Winona History Center, the author of “Winona at 100: Third Wave Rising,” and is able to weave stories within stories about the people and places of the town he calls home. It is for this reason he is known as the “history guy.”

White has developed seven presentations he gives to service clubs and schools covering subjects such as Homer Rodeheaver, the evangelist, music composer, director and publisher; local legends and little known facts; and a local favorite, “Bibles, Booze and Billy Sunday,” a look at the temperance movement in the United States, largely spearheaded by the world-renowned evangelist Sunday, who made his home in Winona Lake.

But history is just one facet of White’s life. He is an accomplished musician and chairman of the Symphony of the Lakes orchestra; board member of Wagon Wheel Center for the Arts; a member of Winona Art Commission; an editor and publicist for both the town of Winona Lake and Grace College, where he once taught journalism; and general chairman for the Sixth Brethren World Assembly, just to name a few. He also has authored, co-authored or compiled books on subjects ranging from the publishing empire of Rodeheaver to the history of the Brethren movement.

Click here to read the complete article (on page 2).