Terry White, Grace College faculty member and author of Winona at 100: Third Wave Rising (BMH Books, 2013), presented the program at the Kosciusko County, Ind., Historical Society on Thursday night. The online news site, InkFreeNews, carried a report of his presentation. A portion of the story appears below. Click here to read the complete article. 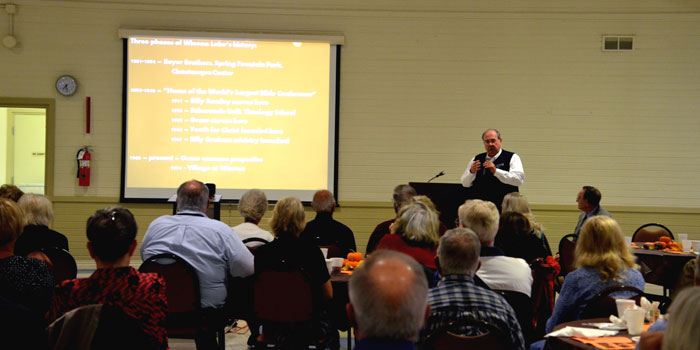 As part of its 52nd annual banquet Thursday night, Oct. 19, the Kosciusko County Historical Society invited local historian and Grace College instructor of journalism Terry White to present “Winsome Winona” to 106 guests. In what may be the fastest recap of 150 years of history, in 45 minutes White presented the history of Winona Lake in its entirety.

White prefers to break the history of Winona Lake up into three sections – 1881-94, 1895-1968 and 1968-present -with the earliest section being the era of the Beyer brothers, followed by a long religious and evangelical era and the build up of Grace College and the Village of Winona.

While some of what White presented was well-known information, such as the history of Billy Sunday, he was rife with interesting facts about Winona and the people who lived there.

Paul Lowman, who lived on Sixth Street, owned a lion named Jerry that he trained to water ski. White stated that Lowman owned three lions over time, shooting the last and burying it somewhere in Winona Lake. “We have a very large prize for the person who can find where the lion is buried,” said White.