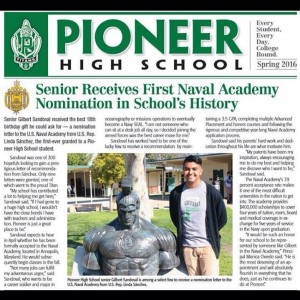 A student from Community Grace Brethren Church, Whittier, Calif. (Richard Todd, pastor), Gilbert (Joseph) Sandoval has been nominated to attend the U.S. Naval Academy — the first in his school to receive such a recognition. He is the son of Gilbert and Dianna Sandoval, who are key leaders in the Whittier church. (Dad-Gilbert, who goes by Joe, also leads the youth group.)

Below is a portion of an article about his nomination from the newsletter from Pioneer High School (Whittier, Calif.). Click here to read the complete story.

Senior Gilbert Sandoval received the best 18th birthday gift he could ask for — a nomination letter to the U.S. Naval Academy from U.S. Rep. Linda Sánchez, the first-ever granted to a Pioneer High School student.

Sandoval was one of 300 hopefuls looking to gain a prestigious letter of recommendation from Sánchez. Only nine letters were granted, one of which went to the proud Titan.

“My school has contributed a lot to helping me get here,” Sandoval said. “If I had gone to a huge high school, I wouldn’t have the close bonds I have with teachers and administration. Pioneer is just a great place to be.”

Sandoval expects to hear in April whether he has been formally accepted to the Naval Academy, located in Annapolis, Maryland. He would subsequently begin classes in the fall.

“Not many jobs can fulfill my adventurous urges,” said Sandoval, who wants to be a career soldier and major in oceanography or missions operations to eventually become a Navy SEAL. “I am not someone who can sit at a desk job all day, so I decided joining the armed forces was the best career move for me.”