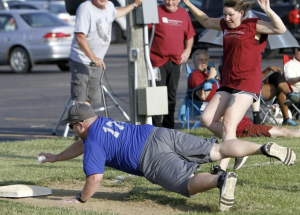 Ashland Police Division’s Alan Swaggard dives to get Transformation Network’s Brittany Henderson out at first base in their game in the Business Division tournament at Wifflefest 20 at Southview Grace Brethren Church Monday, July 1, 2019. There were 13 teams competing in this division with the proceeds being donated to the Ashland Pregnancy Care Center.

Wifflefest, the annual tournament around the backyard game that is played with a perforated plastic ball and plastic bats, is underway in Ashland, Ohio. Sponsored by Southview Grace Brethren Church, a Charis Fellowship congregation in that community, the first round of games in the Business Tournament was played with proceeds going to the Ashland Pregnancy Care Center. Yesterday’s Times-Gazette included a gallery of photos from the day. Click here to peruse the fun!

Below is a portion of the second in a series of articles in the Ashland newspaper about the history of the tournament. Click here to read the complete article, which was printed on June 26, 2019.

Wifflefest unique in almost every way

Editor’s note: This is the second of a three-part series on Wifflefest, in honor of the event’s 20th anniversary.

If one doesn’t have any prior knowledge of Wifflefest, that person may not truly understand just how unique of an event it is year after year in Ashland.

Former Cleveland Indians great Andre Thornton was one of those individuals who underestimated how special the event is.

Thornton came to Wifflefest as a guest speaker in 2005 and again in 2017. According to Wifflefest organizer Pastor Mike Abel, Thornton appeared “hesitant” about the whole idea of the wiffle ball tournament the first time he came, as he wasn’t sure exactly what to expect.

“The first time, you could tell he was super hesitant,” Abel said. “He was like, ‘A wiffle ball tournament?’ I mean, you can just almost tell he was like, ‘I’m not really sure what I’m getting in to.’”

However, Abel said that once Thornton got there and experienced Wifflefest for himself, his whole tone changed.

“Then he gets there and he apologized,” Abel said. “He said, ‘Mark, I did not realize this is what it was. I didn’t realize this thing was as big as it is and professional as it is and unique.’ So the second time we asked him to come, he was champing at the bit to get there. When he came again, it’s like we were old friends. He was talking to me, the people, and it was just great.”

One of the things that has made Wifflefest a Fourth of July staple every year in Ashland is how different it is from other baseball, softball or wiffle ball tournaments. Southview Grace Brethren Church has built 11 wiffle ball fields, designed special rules for the games and created four different age groups for the tournament.

Click here to read the complete article, which was printed on June 26, 2019.