Wifflefest, the annual wiffle ball tournament sponsored by Southview Grace Brethren Church, Ashland, Ohio (Mark Abel, pastor), was featured yesterday in the Ashland Times-Gazette. It’s the first in a three-part series that looks at the 20-year history of the event. A portion of the story appears below. Click here to read the complete article.

Editor’s note: This is the first of a three-part series on Wifflefest, in honor of the event’s 20th anniversary. 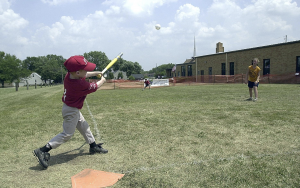 Locals play in the 2002 edition of Wifflefest.

As a youth pastor at Southview Grace Brethren Church in 1999, Mark Abel wanted to do something different with the church’s annual Fourth of July picnic. After mulling over some options for a while, Abel came up with the simple idea of bringing the community together to play backyard wiffle ball.

“I said to Pastor Larry (Edwards), ‘Why don’t we try to do something bigger than a picnic?’ And he said, ‘What did you have in mind?’ I’m like, ‘I don’t know, let me think about it for a while.’ I played college baseball and baseball in high school, and it’s a sport I really love,” Abel said.

“The Ashland area is a baseball and softball area, but knowing we didn’t have the ability to put on a baseball or softball tournament, we came up with the idea of backyard wiffle ball.”

Today, a couple of things have changed since Abel made that decision. Not only is Abel now the pastor of the church, but the wiffle ball tournament he organized on a whim 20 years ago has blossomed into the community-favorite, annual event during the week of the Fourth of July in Ashland known as Wifflefest.

“People ask me all the time, ‘Did you expect it to get this big?’” Abel said. “No, to be totally honest, I was just praying that we would have five teams and we could get through the first year without embarrassing ourselves.”

Abel, who played baseball at Grace College in Indiana, struck gold with the idea of Wifflefest. And since its inception, the event has continued to grow year after year.