Locals turn out in record numbers for Wifflefest 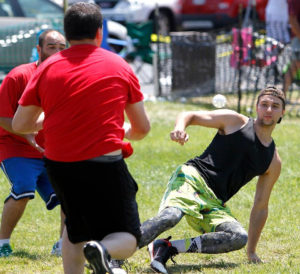 Area residents turned up in droves at the Wifflefest XVIII adult tournament Tuesday at Southview Grace Brethren Church. This year’s field had 60 teams, a new tournament high, disposing of the previous record of 52.

“I’m very, very proud of my church here at Southview,” said Mark Abel, who is in charge of Wifflefest. “I hope that Ashland feels the love that we have for our community and for our Lord and Savior above all things — that’s why we do this.”

“We have really had very few problems,” he said about the various tournaments. “It’s been so smooth, and that’s a credit to the folks coming and knowing the atmosphere we’re trying to create.”