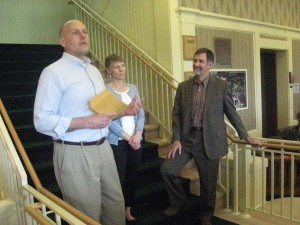 Brent and Deb Wilcoxson (left) were honored Sunday afternoon, April 22, with a public reception for their several decades of effort to renovate and renew the Town of Winona Lake, Indiana. Brent has taken employment in Grand Rapids, Michigan, and they will be moving there soon. At right is Pastor Bruce Barlow of Winona Lake Grace Brethren Church, who presented the Wilcoxsons with gift certificates to the Grand Rapids Symphony as a going-away gift.

For their civic efforts, Brent Wilcoxson was given the Bill Reneker Memorial Community Service Award by the Town of Winona Lake in 1994, and Debra Wilcoxson earned the same honor in 2007.

Wilcoxson and several others founded a local historical society in the mid-1980s, and a neighborhood partnership was formed in 1992 to arrest the deterioration of the community by reconverting multi-family properties back into single-family, owner-occupied residences.

In 1994 Winona Restoration Partners, LLC, was formed to communicate the vision and inspire the revitalization of Winona Lake based on historic preservation. In 1997 the Chautauqua Assembly grounds were purchased from Grace College and Seminary, which had owned the property since taking it over in 1968. The purchase of the Assembly grounds and the restoration of nearly 30 properties into a historic resort and artisan colony have led to an economic resurgence of the community.

Sunday’s reception was jointly sponsored by Church of the Good Shepherd and the Winona Lake Grace Brethren Church and was attended by several hundred friends and community supporters.