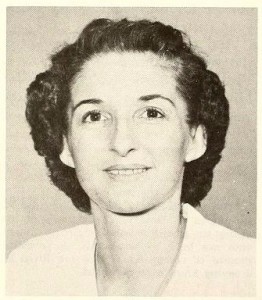 Willie Edmiston as a young missionary. In the feature photo above, Willie (second from left) and her family in San Ysidro around 1965. The vehicle was a donation from the North Long Beach Brethren Church for use in the ministry.

Several months ago we featured Bertie Hanson, world traveler, in the GraceConnect eNews and on this site. In this week’s story, we talked with her sister, Willetta (Hanson) Edmiston, who was a missionary to Southern Texas and Mexico with her husband, Sibley, for 12 years.

Willie grew up in Long Beach, Calif., where she married Sibley in 1946 — six weeks after Sibley returned to the U.S. after the conclusion of World War II. The newlyweds attended Wycliffe Summer School of Linguistics in Saskatchewan, Canada.

After working in Taos, Sibley recognized his need for more biblical training. They moved to Winona Lake in 1950, where for the next three years Sibley attended Grace Theological Seminary. The couple moved to Laredo, Texas, in 1953, to work across the border in Nuevo, Laredo, Mexico, where they ministered for three years supported by their home church in North Long Beach, Calif.

“After a brief furlough replacement for the Haag missionary family in San Ysidro, Calif., our next assignment under the Brethren Foreign Missionary Board was two years in Guanajuato, Mexico. Sib took classes at the University of Guanajuato and had a ministry among the students there,” said Willie.

“Our oldest three children, Leandra, Linda, and Dick attended the local public Spanish speaking school. Neighborhood children and classmates were invited over to their home to hear Bible stories and learn memory verses. There were fun times, too, like neighborhood birthday parties where they had traditional piñatas.”

While the Edmistons served in Guanajuato, Walter and Alys Haag and Roy  Dorothy Hoard were working in Tijuana, Baja California and began a Mexican Bible Institute. She remembers they invited Sib to come help them teach. So the family moved to San Ysidro, Calif., traveling across the border to Tijuana for their work, hosting Sunday school programs and summer camps, and classes.

The Edmistons did this for the next seven years, the remainder of their tenure with the Brethren Foreign Missionary Society (now Encompass World Partners). In addition to teaching in the Bible Institute, there were opportunities to work in Brethren missions in Aleman and Jardin Colonies, vacation Bible schools, and other regular meeting places.

“The most fun of all were the weeks of Summer Camps in the mountains. It was very primitive and required lots of preparation, but the memories live on,” recalls Willie.

“There were scary things about it and surprisingly good things,” Willie recalls. “[Especially] the faithfulness [of the Mexican Christians] once they do come to know the Lord.”

Although no longer supported by the Foreign Missionary Society after 1966, the family remained in the border town area for the next 20 years. Sib obtained employment with the U.S. Post Office and Willie became an elementary school secretary.

They returned to Winona Lake/Warsaw in 1988. Sibley passed away in 2010 at the age of 89. Two years later, Willie’s younger sister, Alberta (Bertie) Hanson, came to live with her. The two share a Robin Hood home at Grace Village.

Willie fondly remembers the births of her seven children and how they represent the various places that the Edmistons lived and served over the years: The two oldest girls, Leandra and Linda, were born in Long Beach, Calif. Richard was born in New Mexico, while Dan was born during the seminary years in Winona Lake/Warsaw. Duane (deceased) was born in Texas, Lorraine in California, and Doug (deceased) was born in Guanajuato, Mexico.