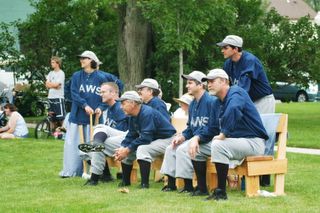 By Amanda Iacone
The Journal Gazette

The sundaes were made in honor of their namesake, Billy Sunday. He was an evangelist, a baseball player, an entertainer and perhaps Winona Lake’s most famous resident.

Saturday was Billy Sunday Day at the historic Village of Winona in Kosciusko County. The event included free tours of Sunday’s early-1900s home and a vintage baseball game. An ice cream social, a watermelon seed-spitting contest and bicycle tours through the village provided more fun while fundraising for the Boys and Girls Club of Kosciusko at the same time – a act Sunday would have approved, said Bill Firstenberger, curator of the Billy Sunday Museum.

This was the fourth annual celebration since the museum opened in 2000, Firstenberger said. Between 650 and 700 people attended the activities Saturday. The event is in August to coordinate with the month when Sunday would preach during revivals at the lake. Sunday spent September through May touring the country, conducting revivals in places like Baltimore and Colorado. During the summers, he had local revivals at Winona Lake, Firstenberger said.

Sunday first came to Winona Lake in 1896, to visit his mentor who had been hired to direct the Bible retreat center there.

He and his wife rented space at the lake while Sunday also worked for the retreat. In 1900, they bought a cottage and 11 years later the couple built a home, which they named Mount Hood, Firstenberger said.

The home belonged to Sunday’s wife until Grace College purchased it and turned it into a men’s dorm, said museum volunteer and local historian Paula Heckman. On Saturday, local Warsaw residents, and theology students from Indianapolis paraded through the home

Peter Baugh and Jeremiah Benson, recent graduates from an Indianapolis Bible college, came to learn more about the preacher, who had a great influence on the America of his time, Benson said.

Although some criticized Sunday for his lavish lifestyle and his ties to politicians and industrialists, Baugh said he respects the sacrifice Sunday made when he gave up a lucrative career in professional baseball to devote his life to preaching.

Sunday played for several professional teams including the Pittsburgh Alleghenys and the Chicago White Stockings before he took a job with the YMCA and then moving on to lead revivals.

Sunday’s electric campaigns were entertaining. It was like going to the circus for those who attended, Heckman said. But they were also politically charged. Sunday was an ardent supporter of prohibition and the 18th Amendment which prohibited alcohol sales in the United States.

Pierceton residents Darla McCammon and DeeAnna Muraski passed on the Billy Sundae. But they brought two friends from Colorado to visit the museum and learn more about Sunday than just his baseball story.