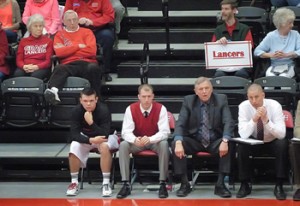 Dick and Ginny Leaf, members of the Winona Lake, Ind., Grace Brethren Church (Bruce Barlow, lead pastor), were featured in Monday’s Warsaw, Ind., Times-Union. The article shared how they have followed the Grace College men’s basketball team for nearly 50 years. A portion of the story appears below. Click here to read the complete article. (Subscription required.)

Buckeyes By Birth, Lancers By Grace
Dick, Ginny Leaf have traveled the country to watch Grace College hoops for 45 seasons

By virtue of being born in Ohio, Dick and Ginny Leaf are Buckeyes.

They will be until their dying day, said Dick.

For nearly 50 years, however, the Leafs – Dick, 84, and Ginny, 82, – have shown their allegiance to the Grace College Lancers.

The Leafs, explained Dick, love basketball, and they love to travel.

Over the last 45 seasons, they’ve been able to combine their passion for both.

They’ve seen the Lancers play in 20-plus states, including four trips to California. They’ve watched Grace play in the Bahamas four times as well.

“I wish we’d kept track of all the miles we’ve travelled,” said Dick. “It’s a lot, I know that. And we’ve loved every minute of it. We both love to travel, and we both love basketball. There will never be another female fan like my wife. For her, it’s God, family and Lancer basketball.”

The Leafs, you see, aren’t just fans of Grace College’s men’s basketball team, the Lancers have become part of their lives – literally – and vice versa.

“In sports, you have fans and you have fanatics,” said Grace College Athletic Director Chad Briscoe. “The Leafs take it to the next level, they’re more like family. They’re an extension of the program. They’re a part of the players’ lives.

They’ve opened their home to the players and their parents. They’ve impacted the players’ lives, and never asked for anything in return. They’re very, very special people. I probably wouldn’t recognize Dick without his red sweater.”
The Leafs, who grew up in neighboring towns in Ohio, got married in 1954.

In 1969, they moved to Winona Lake, as Dick accepted a maintenance job with Christian Assembly.

They’ve been a staple at Grace College games ever since.

At last week’s NCCAA National Championships at the Manahan Orthopaedic Capital Center, they were in their usual seats near the Lancers’ bench.

Dick estimated that in 45 seasons they may have missed a total of 40 games.