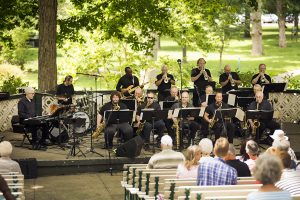 The Winona Lake Jazz Festival will take place on Saturday, July 28, from 11 a.m. – 8 p.m. at the Village Amphitheatre on Tabernacle Lawn, 801 Park Ave., Winona Lake, Ind. Part of the Grace College and Village at Winona Festival of Music, the free, outdoor concert will feature six musical groups performing a variety of jazz styles and compositions on two stages.

The lineup includes the returning Wally Brath Trio and New Millennium Jazz Orchestra, as well as internationally recognized jazz guitarist Rez Abbasi. This year’s Jazz Festival will mark Abbasi’s first visit to Winona Lake. The New York-based jazz guitarist is considered one of the foremost modern jazz guitar players in the world. He has performed globally throughout Europe, Canada, Mexico, and India, in addition to across the United States.

The complete concert schedule is as follows:

In addition to a terrific concert line up, the Jazz Festival will feature a variety of food vendors and Mynett Music, a Sweetwater Sound company, will provide musical instruments for the public to sample.

Other upcoming Festival of Music concerts include the Southern Gospel concert with the Booth Brothers on August 5 and the contemporary Christian concert featuring Sarah Groves, Andrew Peterson, and Over the Rhine on August 11.  Visit grace.edu/musicfestival/ for more information.