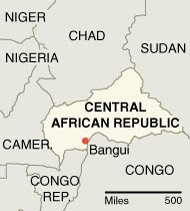 The following article connecting Winona Lake, Indiana, with the Central African Republic appeared in this morning’s Warsaw (IN) Times-Union. This is an excerpt–to read the entire article click here.

Hundreds of thousands of people are homeless, starving or in continual danger of attack by bandits and militant rebel groups in the Central African Republic.

According to a report from the British Broadcasting Corp., one in five of the Central African Republic’s children never reach their fifth birthday, and the percentage of women dying in childbirth is amongst the highest in the world. There is little health care and public sanitation in much of the country and, according to the BBC, the life expectancy has fallen to 42 years.

Integrated Community Development International, Grace Brethren International Missions and Grace College, all based in Winona Lake, are each involved in helping to provide different services and ministries to the people of the Central African Republic.