A story on Wednesday on WANE TV-15, Fort Wayne, Ind., brings up memories of the iconic sports movie, Hoosiers. Warsaw, Ind., dentist, Steve Hollar, played the role of Rade Butcher in the movie. Previously, he played on two state championship basketball teams while at Warsaw Community High School and went on to play basketball at DePauw University. He’s also a member of the Winona Lake, Ind., Grace Brethren Church (Bruce Barlow, lead pastor). A portion of the story appears below. Click here to watch the complete broadcast, including some web extras.

Warsaw dentist looks back on role in iconic movie “Hoosiers” 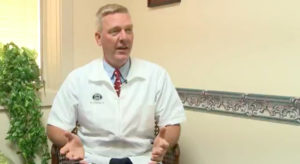 Steve Hollar, who played Rade Butcher in the movie, “Hoosiers,” is a dentist in Warsaw, Ind.

When you grow up in Indiana, talking about basketball makes you smile.

Both of those things are important to Steve Hollar.

The Warsaw dentist played the role of Rade Butcher in the iconic movie “Hoosiers” that debuted in 1986. In fact, he also led the Tigers to a real life state title in 1984 which helped him get cast for the movie when he was a student-athlete at DePauw University at a 19-year-old.

Hollar can tell stories for hours about his time on set, his one-on-one acting lessons from Gene Hackman and the historic final scene with Jimmy Chitwood hitting the game-winning shot at Hinkle Fieldhouse.

Even 30 years later – and after being a dentist for the last 24 years – he still enjoys talking about his movie.

Click here to watch the complete broadcast story, including some web extras.