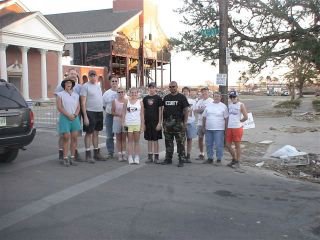 A team of relief workers led by Winona Lake (IN) Grace Brethren Church is currently in Gulfport, Mississippi, working to assist families from WLGBC’s “adopted” church, First Baptist Church of Gulfport, and its daughter church, Cross Point, with cleanup. Here are excerpts from team members’ reports:

The damage here is indescribable. The pictures don’t do the devastation justice.

Sunday
A rewarding day today. The morning started off with a good breakfast and fellowship together as a group. We then attended a very uplifting worship service here at the Cross Point Church. They are a warm and friendly group of people, with quite a ministry reaching out to the hurting of the community. As we worshiped with them, and sang songs about the majesty of God, we were encouraged by the faith of these people who had experienced the tragedy of Hurricane Katrina.

After church, we went to a house of a couple that attends the Gulfport First Baptist Church. Their home had been totally flooded inside, the waters had almost reached their ceiling!

They had had to totally gut the house, and when we arrived there was a lot of drywalling that needed to be done. The men in our group did most of the drywalling, and we ladies cleaned up a lot of trash and debris outside, hauling to the curb debris that had been strewn all over the yard.

When we finished there, on our way back to camp, we decided to drive as close to the shore as we could get. The police have blocked off a lot of the worst areas for safety reasons.

However, we did see a lot of damaged buildings, and we were sobered by what we saw. We will be seeing a lot of devastation in the next week, and it breaks our heart. We stopped to take a team picture in front of the First Baptist Church that had been destroyed by the hurricane, and as we did, we met a friendly Security Guard. We had a nice chat with him, and took our picture with him (photo above).

His name was Pierre, and he was actually from the country of Belgium! He had been on vacation in Florida when the hurricane had hit, and decided to stay and volunteer his time helping wherever he could. He said he has to go home in November because he is here on a visitation visa, but he will be back as soon as he can. What an inspirational story!

Monday
This morning we left at about 8:00 and went back to the house we had worked at yesterday. We still had a lot of drywalling left to do, and we wanted to get the entire house drywalled. We were able to accomplish that.

We all worked as a team, and by about 5:00 this evening the house was done. We had a lot of fun and we were very thankful that we were able to help out this family who had literally lost everything in the hurricane.

Just as we were finishing up and getting ready to leave, the brother-in-law of the man who owned the house stopped by. He was very grateful for what we had done for his family. We all had a great time talking with him and getting to know him.

His family and the family who lived in the house we had done, both attend the Baptist Church of Gulfport. It was a joy to meet this brother in the Lord. He told us a lot about what he and his family had experienced during the hurricane, and about the effects of the hurricane to the community.

Tuesday
Today was a very full day. We worked hard and our muscles are sore! We went to two different homes, one in the morning and one in the afternoon, and we chopped apart trees and hauled away branches and debris that had literally cluttered up the yards.

Trees had been blown over and blown into these peoples’ yards during the hurricane, and the yards were a total mess. We all worked hard, and were able to clear out the yards. It felt good to help these folks who had suffered so much.

No one was actually home at the first home we were assigned to, but as we were working on their yard, their next-door neighbor asked if we would be willing to chop up a huge tree that was in his yard and haul it all to the curb. He was an elderly man who attended the First Baptist Church. What a coincidence! It was nice talking to him.

He told us that the huge tree we were cutting down, he and his wife had planted together years ago. His wife had died several years ago, so he was sad to see the tree go…another tragic loss in the storm.

After stopping for a picnic lunch, we went to the second home. There was an elderly man who lived there, and he was very grateful for our help. He was even out there with us working, and he was very moved that we would spend our time to clear out his yard.

It was good that God had sent us there to talk with him, because he really needed some people to talk to. He told us about his wife, who has Parkinson’s Disease and was very traumatized by the hurricane. They were staying with some friends, and she was not able to come back to their house at all yet, because she was too afraid to face it.

This man, his name is Tom, was overwhelmed by all the work there was to do, he hasn’t even begun to go through his home yet. Several times as he was talking to us he would get emotional. We were thankful that we could minister to him. We are not sure if he was a Christian or not, but he wanted all of our addresses, so we will probably hear from him again!

We have now treated ourselves to an all-you-can-eat pizza buffet down the road, and are relaxing and getting settled in for the night. As we look back on our day, we are thankful that we were able to be used by God to bless others today! We thank you all again for your prayers!