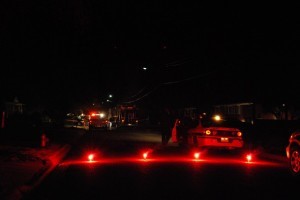 The fire was reported around 11:10 p.m. Saturday in the 6100 block of Parkview Lane.  A woman from that home went to a neighbor’s house seeking assistance.

One source says she reported that her house was on fire and that her daughter was trapped inside.

Firefighters arrived several minutes later and found smoke coming from the single-family dwelling.  After a brief search, they discovered the victim.  She was pronounced dead at the scene.

The woman who escaped the fire, reported to be a 42 year old, was flown to a hospital for smoke-related injuries.  A state police helicopter landed at the Grace Brethren Church to fly her to a trauma center.  Her condition was described by a fire department official early Sunday as not life-threatening.

Investigators remain on the scene Sunday morning searching for clues.  The name and age of the decedent has not been released.