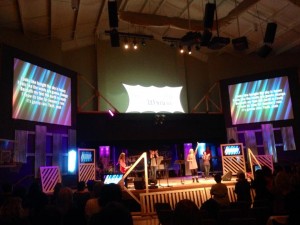 The 40-day Challenge, part of the ReMARKable women series by Goshen Grace Community Church, kicked off the evening of January 24 with joyful worship.

On January 24, despite fierce gusts of wind and deep snowdrifts over the roads, more than 350 women gathered at Grace Community Church, a Grace Brethren congregation in Goshen, Ind. (Jim Brown, pastor).

It wasn’t a typical church service. For starters, the band, the leaders, the congregation were all women. They played games. They sang loudly, hands outstretched. They laughed a lot.

If you had been there, at one point during the evening you would have seen each of them turning to the woman next to them with a red-inked thumb and press it into her palm.

“Having believed, you are MARKED in him,” they recited to her.

These symbolic words marked the beginning of the 40-day challenge; part of an initiative by the Goshen Grace Community Church called ReMARKable Women, based on the words of Ephesians 1:13.

“In times past, people used to mark a clay seal with their fingerprint to authenticate the enclosed document,” explains the ReMARKable Women website.  “The fingerprint was used as a very personalized signature.  When God marks us, it’s as if He leaves His fingerprint or ‘signature’ on us that says, ‘YOU are mine.’”

“We ask women to set aside just 40 days two times a year to purposefully focus on their relationship with God,” explained Shali Yoder, director of women’s ministry at Grace Community and of the ReMARKable Women program. “So often if we are not intentional about moving forward in our faith, it simply does not happen.”  During the 40-Day Challenge, women have the chance to encourage each other through weekly challenges, varied contact with a challenge group and prayer partner, and three large-group events.

“It’s helpful to keep your finger on the pulse of what’s going on,” noted Shali. “It is a branch-off of the thinking that originated with Jim Brown (creator of Fight Club), 10 years in the making.”

The 40-Day Challenge first launched last February and this past Friday, January 24 kicked off its third round.

This story first appeared in the GraceConnect eNews, No. 32, Week of January 27, 2014. Click here to subscribe and read the stories as they are published!