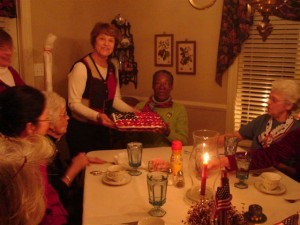 Becky Dick (standing left), leader of the Africa circle of the Women of Grace group at the Winona Lake (IN) Grace Brethren Church, presented a cake Tuesday evening to Honorine Marandet, a Central African lady who has lived in the Warsaw area with her family
for some years. Honorine recently passed her test to become an American citizen. The formal ceremony will be sometime later this month in Fort Wayne. The ladies gave her a flag holder so she could attach it to her house and an American flag. (Miriam Pacheco photo)