Wooler and Orme Head Across Country, Again, to Benefit Hand in Hand Schools

Barb Wooler and Judi Orme are once again cycling across country to bring attention to the Hand to Hand Schools in the Central African Republic. This time they’ve traded their bicycles for two-wheelers of another sort — motorcycles. They are roughly following the same route they followed last year, as the fires in the Northwest have forced them to find alternate routes. They began July 28 in Seattle, Wash., and have traversed through the Chinook Pass and the Yakima Valley of Washington State; Sandpoint, Idaho; and Glacier National Park.

Yesterday (August 1) found them motoring through Montana… sort of. Below is their blog entry from Sunday. 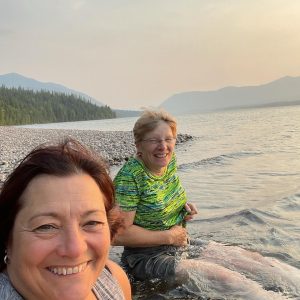 Judi and Barb cool off at Glacier National Park after riding through 100 degree heat.

Summer Skating in Montana — Judi and I grudgingly left West Glacier and headed to East Glacier. We did so “grudgingly” because leaving Glacier means leaving the extraordinary beauty of the Rocky Mountains. The beauty of East Glacier is more understated as compared to West Glacier, but still amazing.

On our way to Great Falls MT we found a frontage road that allowed us to avoid interstate…so we thought. We were riding along when the paved road unexpectedly turned to gravel! We eventually slowed to a stop, and after consulting together decided driving forward 2.4 miles was to be preferred to trying to do a tight U turn on gravel. So that’s where the occasional “summer skating” came in as we slowly made our way back to the blacktop.

It was fun to revisit routes we took last year on the bicycle version of this cross-country trip. We have some very distinct memories in places, like where we saw a sidewinder or where we stopped to share a break together. Honestly, we can’t help but be a little impressed by what we achieved last year doing this ride via bicycle!

Barb is the director of crisis response for Encompass World Partners and Judi is the widow of Larry Orme, who pastored at Penn Valley Church, a Charis Fellowship congregation in Telford, Pa., until his death from pancreatic cancer in 2017.