A story posted in today’s Wooster, Ohio, Daily Record details how a Wooster man found his biological mother and in the process, found a family connection with the father of his daughter’s good friend, Daron Butler, who is on staff at Grace Church (Nick Cleveland, pastor) in Wooster. A portion of the story appears below. Click here for the complete article. 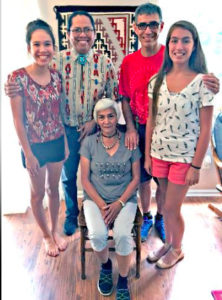 Rene Chase Begay (seated) has reconnected with her biological son Jonathan Shell (in red shirt), whom she gave up for adoption in 1968. On a visit to Wooster, Begay also found she is related to Wooster resident Daron Butler, a friend of Shells. Also pictured are Butler’s daughter, Carissa (left) and Shells daughter, Neena (right). (Daily Record photo/Tami Mosser)

This is a story of a reunion, between mother and son, son and culture and the family members brought together as a result.

Jonathan Shell’s parents had always been up-front with him, he said, about how he had been adopted. They knew little of his biological mother, but the caseworker who brought them their baby boy in 1968 told them she believed him to be of Navajo origin.

“His parents always celebrated this mystery woman,” said Shell’s wife, Ann Marie, “and they wanted to meet her and thank her one day.”  …

Now reconnected, Begay sent Shell a church newsletter, pointing out one of the upcoming speakers was from Wooster.

The name was more than familiar — Daron Butler, the father of Carissa Butler, a good friend of Shell’s daughter, Neena.

Butler, also a Navajo, had spent time on the reservation, where his parents still live. He came east nine years ago to take a position as the cross-cultural ministries pastor at Grace Church in Wooster. And when Begay made her first visit to Wooster this week, they had a chance to get to know each other.

They talked about the reservation, about family both present and past.

And that discussion turned up something else — Begay and Butler (and thereby Shell) are related.

It’s difficult to explain, Butler said. In the Navajo clan system, lineage is traced through the mother and each person ends up with four clan names. In that culture, Begay and Butler would be considered brother and sister, though outside the Navajo Nation, he said, “we’re more like first cousins. We share the same family clan names.”