MANSFIELD — Mansfield native Kimberly (Yeager) Miller is one of five featured ventriloquists in the film, “Dumbstruck,” a documentary by director Mark Goffman. 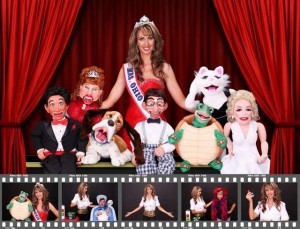 The movie tells about the struggles of five ventriloquists, including “America’s Got Talent” season two winner Terry Fator.

“Dumbstruck” tells the humorous, heartfelt story as these performers pursue their dreams of a career in puppetry. The film follows across the United States, the Mexican Riviera, the Bahamas and Japan.

The movie debuts across the country this weekend. It won the Best of Fest award at the Palm Springs Film Festival last year.

Miller’s storyline tells about her performing at children’s shows and wanting to branch out to working on cruise lines.

A 1994 graduate of Madison Comprehensive High School, Miller graduated from Liberty University in 1997 with a master’s degree in marriage and family counseling. She has an educational interpreting certificate from Columbus State University and is a part-time sign language interpreter for the Rehab Center in Mansfield.

Miller: Filming was very fun. In this movie, the world will see that I am not the only person who talks to themselves and plays with dolls for a living.

Overall, I enjoyed telling my real-life story of what it’s like working as a professional ventriloquist and magician, and they saw firsthand what that entailed. It made me nervous at the beginning of the filming process, always having a camera on me and told to “just act natural and be yourself” … but then I quickly got used to the cameras and forgot they were even there most of the time.

The filming process was over a period of two years. … They set up cameras in my car, filmed me in my home, my parents’ home, my church and at my shows. They came on a Bahamas cruise … to film me performing on a cruise ship. They used a lot of that footage in the movie. …

What have you been doing since then?

Miller: Since the filming process my life has dramatically changed.

The filming process for me was in 2006-2007. As the filming was ending, I had decided that I did not want to live and work on a cruise ship after I saw what life was really like for performers. I heard about so many people that had marriages fall apart, and you can’t bring your dogs. I really thought I could bring my dogs, since I trained them to use a litter box. The film shows my struggles with wanting to work on a cruise ship and making that decision, if that is the life I really want.

During the filming process, I met and began dating my future husband, Brooks Miller. We were married on May 23, 2009. …

In June 2010, I won the title of Mrs. Ohio America 2010 and competed in Mrs. America last September.

Currently, I stay steadily busy performing family-based shows for business organizations, schools, churches, shelters, etc. In January 2011, I was a headliner for the All-Star Show at MAGI-FEST in Columbus.

Has the film opened any doors for you?

Miller: The film premiered last week in Atlanta, and I’ve had two calls this week from booking agents. One from Illinois who owns a modeling talent agency that wants to sign me … and another talent agency from Cleveland. So I’m excited about the future possibilities this movie could bring.

My career goal is to star in a children’s television show with my puppets and magic, teaching educational topics through entertainment. Shari Lewis was a great example of this. She took an old sock and turned him into a superstar on television. …

What can you tell us about your personal life?

Miller: My husband, Brooks Miller, and I live in Wooster. He is a graduate of the (United States) Military Academy at West Point, and an Iraq war veteran and captain. We attend Grace Brethren Church. I am a volunteer with “Every Woman’s House” in Wooster. We have three dogs, Jasper, Julip and Jepetto. Our future plans are to expand our family with “real” children.