An article in Tuesday’s Wooster, Ohio, Daily Record, tells about Warren Dick’s dream of beginning a university in Ethiopia. (Warren is a member of Grace Church, a Grace Brethren congregation in Wooster, Nick Cleveland, senior pastor, where he currently serves as moderator of their board.) A portion of the story appears below. Click here for the complete article.

Wooster man wants to start a university in Ethiopia 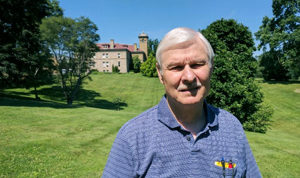 Warren Dick, a retired professor and soil scientist who is a member of Grace Church (Wooster, Ohio), is following a dream he has had for 40 years: establishing a university in Africa.

WOOSTER — About four decades ago, when Warren Dick was a college student, he went on a short-term summer missions trip to southern Sudan.

Though he returned to the United States, in some ways, Dick never fully left Africa. He always wanted to return to establish a university, and his dream is close to being a reality for the soil scientist, now retired from the Ohio Agricultural Research and Development Center.

Dick had desires to become a physician and help the people of Africa. But, on that trip to Sudan, he realized he could contribute via agriculture. He had grown up on a farm in North Dakota, and he believed then his agricultural skills would be of better use.

He became a soil scientist. Some of his latest research has been trying to work with gypsum to help battle the phosphorus runoff into Lake Erie.

About 10 years ago, Dick met a man from Ethiopia and started talking to him. He discovered the two had a similar dream about starting a university in Africa. Instead of Sudan, the man’s plan was to establish one in Ethiopia.