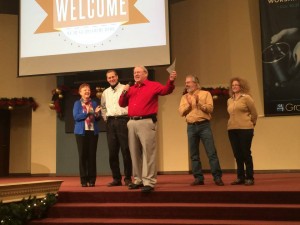 A thriving church often places a lot of emphasis on community – how well the members work together to serve one another and others outside the church.

The Chateau is a literal castle on a hill outside of the village of St. Albain, France. Purchased in 1964 under the leadership of missionaries Tom and Doris Julien, the Chateau began as a place for building ministry bridges with the people of France. It has since evolved into a retreat center used by evangelical churches and individuals from all over Europe. As the Kieffer’s assignment neared its end, Encompass began to look for replacements.

Around the same time, Ashland members Bruce and Karen Beck, owners of The Olde Stone House Bed and Breakfast in Mansfield, Ohio (since closed), were on an extensive cross country tour of America on their tandem bicycle. They came through the experience believing that God wanted them to be open to a change when they returned.

The call for change came even sooner than they expected.

“The week when [The Becks] got back was a week when we had a specific prayer emphasis to find a replacement couple to step in for Bob and Lisa,” explained John Ward, director of mobilization at Encompass.

“By Thursday of that week, they had called me asking about it.”

The Becks traveled to The Chateau in November for an exploratory trip and made the decision to accept the position. Previously, the couple, with their bed and breakfast experience, had advised the Kieffers as Bob and Lisa prepared for their term at the Chateau. Bruce and Karen never dreamed of having the same opportunity just a few years later. (In the photo above, Norm Johnson, missions pastor at the church, introduces both couples during a service.)

“It really was an answer to prayer,” said Ward. “We’re very appreciative for a church like Ashland that sends two of their couples to step into this role.”

Whether as a couple working together to run a retreat center, a family helping another family prepare for ministry work, or a church working with a missions organization, working in tandem is paying off in glorious returns for God’s kingdom. Keep the Becks in your prayers as they set their sights on a March an arrival date, and are raising support and prayer partners.

To learn more or donate toward the Beck’s new ministry, click here. Send them a note of encouragement at bkbeck@encompassworld.org.