Worshiping With the Brethren in Mansfield 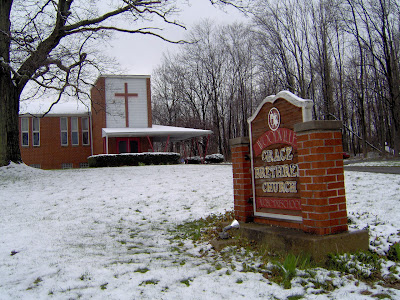 YIB (Your Intrepid Blogger) worshiped this snowy Lord’s Day morning with the good folk at the Woodville Grace Brethren Church on the south side of Mansfield, Ohio (Ron Smals, pastor).
We represented BMH and participated musically in the service and had a great time of worship and fellowship with Pastor Ron, his wife Susan, and their fine congregation.
Tomorrow we will be participating all day in meetings of the Brethren Encyclopedia Board, which meets in the archaeology room at Ashland (OH) Theological Seminary. The six cooperating Brethren groups are making joint plans for the celebration of the 300th anniversary of the founding of the Brethren movement in 1708.
GBIM’s Ted Rondeau and BMH publisher Terry White will represent the FGBC, as plans are developing for a tour to Schwarzenau, Germany, in August of 2008 to join in celebrations marking the 300th anniversary. Information about the tour will be available by Equip07 sessions in late July.
Social Share