Jordan Ensign, who graduated from Worthington Christian High School, a ministry of Grace Polaris Church on the north side of Columbus, Ohio (Mike Yoder, lead pastor), has landed her “dream” role in a touring production of The Phantom of the Opera. A story in This Week News chronicles her path to this choice role. A portion of the story appears below. Click here to read the complete article. 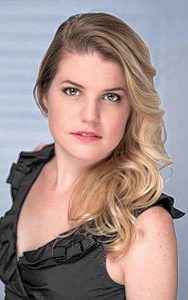 In 1995, there came a defining moment in the young life of Jordan Ensign.

She saw a production of the musical “The Phantom of the Opera,” and the 5-year-old was hooked.

“Phantom was the first time I knew I loved music,” she said.

Ensign is part of the ensemble cast and occasionally plays the lead female role, Christine Daae, in the traveling production of “Phantom,” which will wrap up its series of central Ohio performances Sunday, Jan. 14, in the Ohio Theatre, 39 E. State St. in downtown Columbus.

Ensign’s life has been all about musical training with lessons in piano and voice, acting in Columbus Children’s Theater and singing in school choirs.

It might appear that performing would be a natural for the 2008 graduate of Worthington Christian High School.