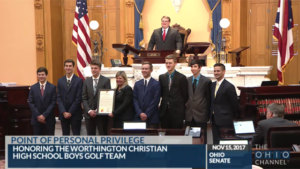 The Worthington Christian High School boys golf team was recognized on November 15, 2017, on the floor of the Ohio Senate after winning their first DIII state championship in the history of the school. Senator Stephanie Kunze read the resolution.

The team’s first-day score of 306 was a single day record for DIII Boys golf in Ohio.  They finished 17 strokes better than the runner-up after two days.

Click on the video below to watch the presentation, which begins at approximately 5:00. (Thanks to Ken Lawson for sending the information!)