Worthington Christian Senior Has Standout Career on the Track

Ashley Hall, a senior at Worthington Christian High School and two-time state qualifier for the track and field team, is featured on the This Week Community News site. (Worthington Christian High School is a ministry of Grace Polaris Church, a Charis Fellowship congregation on the north side of Columbus, Ohio, Mike Yoder, lead pastor.) A portion of the story appears below. Click here to read the complete article. 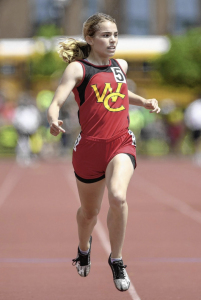 Being focused never has been an issue for Worthington Christian senior Ashley Hall when it comes to competing in track and field.

On more than one occasion in past seasons, girls coach Mark Mousa would remind Hall that it was time to go to an awards podium, only to have Hall respond about how her cool down would take precedence.

“She knew when she needed to start warming up that it was all about preparation and routine,” Mousa said. “That was the cornerstone of her success, that her body knew exactly what to do at every point of the race. She was such a creature of habit. She trained hard but understood that it’s different when you’re racing. When she was racing someone, she was never cocky. She’s a humble, sweet, quiet girl, but with competition, she’s intense.”

Hall wonders whether her determination may have been a slight hindrance to achieving her goals last season. Before this season was canceled because of the COVID-19 coronavirus pandemic, she had set her mind on running with more confidence.

Last season at the Division III state meet, Hall left feeling disappointed after placing 10th in the 200 meters in 26.18 seconds, .01 of a second from reaching the final.

“My biggest adversity was just coming out of my sophomore year after placing fourth at state,” Hall said. “I put a lot of pressure on myself and I think that hurt my junior year, so that was something I wanted to work on heading into my senior year.