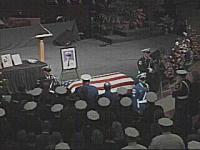 The Grace Brethren Church of Columbus, OH, is this noon hosting a funeral for officer Bryan Hurst, 33, who was killed Thursday during a bank robbery attempt. Thousands are attending the funeral of Hurst, who had been a police officer for eight years in Columbus. Dan Hammers, pastoral care pastor at the Columbus church, explained that although the officer and his family are not part of the Columbus church, “We are hosting the funeral because our auditorium is one of the few here in the north end of Columbus that can handle the crowd that will come for the funeral of a police officer killed in the line of duty.” The church is also providing a family meal on site after the funeral, according to Hammers, who says, “We have done this before as a service to the community and a ministry to the family.” Detective Kenneth Lawson, who is also a leader in the Columbus church, said, “I wanted to let the Fellowship know how GBC of Columbus cared for the law enforcement community today. They hosted the funeral, dismissed pre-schoolers and went to great lengths to minister to officers today. Their efforts were very much appreciated on a solemn occasion for us. I was proud to be a member of both CPD and GBC today.” (photo from NBC4News)