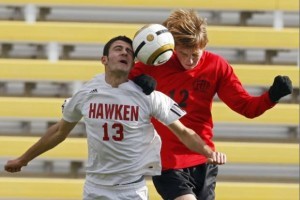 Brett Elder and his Worthington Christian teammates had just won the Division III championship by defeating Gates Mills Hawken 2-0, but the Warriors had somewhere else to be.

After accepting the championship trophy on the field at Crew Stadium and showing it to the team’s cheering fans, Elder took off running.

Up he went, over the railing and up the 53 stairs to the suite level. For Elder and a handful of teammates, the destination was a wheelchair-bound man clad in a red jacket: Worthington Christian Principal Tom Anglea, who is battling stage IV brain cancer.

Elder embraced Anglea, who he later said has been a major influence on him, and handed him the trophy.

“I was just saying, ‘We love you; we’ve been praying for you,’   ” Elder said. “He’s been a great mentor for me all four years of my high-school career. It’s been really upsetting for me to see him in that state.”