Writers Guild Staff and Board Meet in Denver 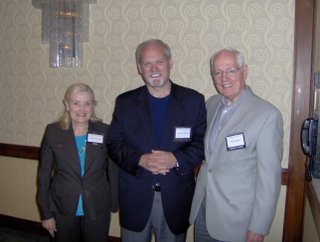 Norm and Ginny Rohrer, along with about 48 mentors and board members of the Jerry B. Jenkins Christian Writers Guild, met today in Denver for mentoring updates and strategy meetings. Best-selling writer Jerry Jenkins (center) purchased the Guild from founder Norm Rohrer in 2001.

Rohrer, who worked his way through Grace Seminary in the mid-1950s by writing and selling articles to Christian periodicals, founded the writer’s correspondence school in 1964. He and his wife, Ginny (who is a sister to Mrs. Homer [Bev] Kent) operated the Guild continuously until selling it to Jenkins.

Rohrer, who now lives in Nashville, Tennessee, also served a number of years as the head executive of the Evangelical Press Association, and he is also the author of A Saint In Glory Stands, the biography of Dr. Alva J. McClain, published by BMH Books.

BMH publisher Terry White, who has been a mentor with the Guild since 2002, was part of the meetings, which were held in conjunction with the ICRS (Christian Booksellers Convention) meeting in Denver.